American model Emily Ratajkowski has landed herself in hot water after comments that she posted on Instagram and Twitter were deemed offensive to people who were experiencing hair loss.

The 26-year-old Californian was posting to social media after having won a new contract to be the face of the haircare brand Kérastase, only to find herself pilloried by some fans when she wrote that “hair is a fundamental part of beauty, femininity, and identity.” The full original post is pictured here. 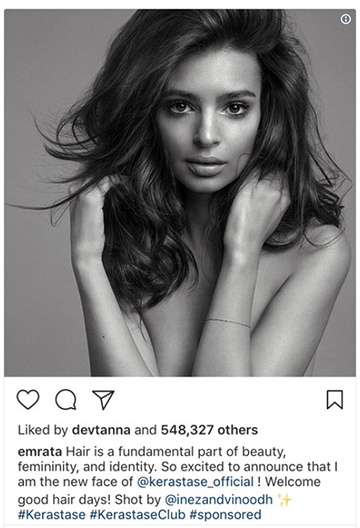 
Critics were quick to point out that these comments were somewhat insensitive to anybody who had lost their hair either to chemotherapy treatment or perhaps to the autoimmune disorder alopecia areata or one of its related phenotypes, alopecia totalis and alopecia universalis.

The Evening Standard picked up on the story and highlighted some of the comments. Among these were: “Are you for real @emrata my best friend @zconers has endured chemotherapy radiotherapy and a stem cell transplant and lost every last hair on head yet it was the most beautiful I have ever seen her!?” And also: “Pretty sure all the girls and women that have lost their hair are still just as beautiful. I used to be a big fan of you, but this is just shallow. Unfollowed.”

A third posted: “And your apology? Did it get lost in your ego or in all that beautiful hair that defines who you are?”

Following the furious reactions, Emily Ratajkowski deleted her original tweet and replaced the caption on her Instagram post with some less controversial text. She also tweeted an apology, saying: "I really apologize about my post that hair is a beauty of a feminine. I didn’t mean to offend people who are struggling w/ cancer.. I meant that everyone is beautiful on their own way and my hair is something beautiful that makes me confident about myself."

Kerastase also took down the advert from its social media channels and responded to commenters saying, "We are deeply sorry for offending our fans and followers - it was absolutely not our intention. As our new muse, Emily, says, "everyone is uniquely beautiful in their own way", and we agree wholeheartedly. We sincerely apologize and appreciate that you have called us out. We have learned from this and we will do better in future."


Ratajkowski’s initial suggestion that hair is a fundamental part of beauty, femininity and identity is actually a far from uncommon standpoint, though it is often espoused by women who are losing their locks and who are, therefore, coming at things from a slightly different angle.

Hair lost during cancer treatment is especially hard to bear, and most women who are undergoing chemotherapy will be warned that they can expect to lose some or most of their hair. In many cases, it will grow back, and shedding can also be avoided or minimised some of the time if a patient is able to use a scalp-cooling device called a cold cap during treatment.

When regrowth is stubborn or otherwise problematic, help can sometimes be offered by a specialist hair loss clinic. At Belgravia, hair growth can often be given a helping hand courtesy of a bespoke hair loss treatment course tailored to the individual's specific condition, medical and lifestyle needs. These courses feature clinically-proven medications and additional hair growth boosters such as the highly-targeted nutritional supplement Hair Vitalics for Women for healthy hair growth.

This can also be of help in cases of alopecia areata, though supplements would not normally be considered a primary treatment option. When hair lost to alopecia areata is not too widespread i.e. it presents as small bald patches then Belgravia’s experts have found that high strength minoxidil from the formulations available at the clinics’ in-house pharmacies can be very effective, as shown in the assortment of before and after photographs in the archives.