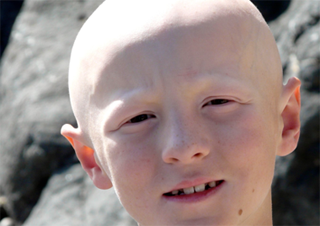 According to regional newspaper Solihull News, a mother in the Midlands has recently been campaigning to raise awareness of Alopecia, after her seven year old son began suffering from the condition.

The condition was apparently triggered two year ago when his grandfather died and his grandmother had a heart attack within just a couple of months of each other. When the boy, Daniel Jones, began suffering from patchy hair loss and bald patches at the back of his scalp, his mother Kellie, 32, took him to a dermatologist.

“My son was very close to my dad and is to my mum,” she told the newspaper.  “He developed a couple of round bald patches at the back of his head so he was referred to a dermatologist who said it was Alopecia.”

is a condition in which the individual suffers from patchy hair loss on the scalp. It can affect children, and men and women of any age. It is the result of an auto-immune dysfunction which results in the body’s own defences attacking healthy hair follicles. The exact causes for the condition are unknown, but it is known to be triggered by periods of extreme stress, shock and trauma.

“While waiting for his next appointment, Daniel’s hair rapidly fell out including his eyebrows and eyelashes. The consultant said he had Alopecia Universalis and his hair wouldn’t grow back.”

While sufferers of Alopecia Areata often experience some hair-regrowth eventually, when the hair loss has become total and all the follicles have died, hair will not re-grow with or without treatment.

Support for children with Alopecia

Daniel’s mother goes on to say that after his diagnosis with Alopecia Universalis, “we felt very alone and in the dark.” But they found support and understanding from Alopecia support group BeBold, which campaigns to raise awareness of the condition and organises events to help those who suffer from it.

Daniel and his mum attended the group’s Alopecia Awareness Weekend, a summer camp in Scarborough held for children who suffer from the condition. The event’s organisers explain that, “the purpose of the event is to allow children and parents to meet other families who suffer the consequences of the devastating condition... It’s all about helping people to tackle Alopecia, and to build confidence and self esteem.”

Daniel’s mother says that since meeting other children who suffer from the condition he is coping much better and coming to terms with the condition. She meanwhile has taken the bold step of shaving off her own hair to raise money for Alopecia awareness charities.

BeBold’s Alopecia Awareness Weekend is held annually in the summer, and anyone interested in finding out more about the event should visit the Bebold website.