Men whose hair loss has been caused by the genetic condition male pattern baldness may feel like they are currently being bombarded with stories of celebrities who have had a hair transplant to try and deal with their thinning hair. And as these operations steadily lose their stigma, they have been likened by one proponent as the male equivalent of a 'boob job'.

These are the words of TOWIE star Jamie Reed, who spoke to the Mail Online about his eight-hour hair transplant procedure. At 35, Reed is among the 45% of men of his age and under to have noticed signs of male pattern baldness, and like numerous other celebrities including footballer Wayne Rooney, Love Island’s Alex Beattie, former footballer turned Real Housewives of Cheshire star Ashley Ward, X Factor and Dancing on Ice contestant Jake Quickenden, Gogglebox pundit Chris Steed (a hairdresser who previously wore wigs to cover his advanced hair thinning on top) and more  his press appearance is helping to normalise men's hair restoration. 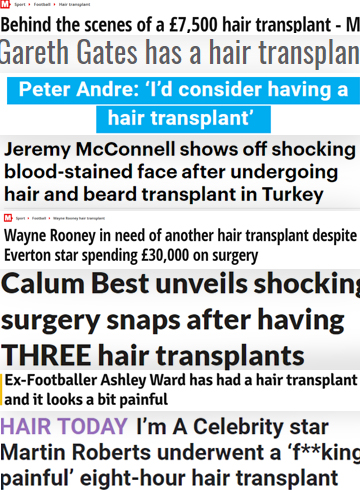 It has been speculated that the reason that hair transplants are getting so much media attention of late is that some of the surgeons involved have realised that getting young, famous and attractive people to talk about their service is a great way to gain new clients. It is surely no coincidence that so many of these celebrities are telling their stories to the newspapers and posing for 'before and after' pictures.

While it is encouraging to see young men taking such an open approach to tackling hairloss, transplants only tell one part of the story. What has been overlooked in many newspaper articles is the fact that most men who plan on taking the surgical route are advised to undergo male hair loss treatment for at least six months before their operation. This is intended to maximise hair growth and stabilise hair fall so that hair is not shedding during the process, making the area easier and cleaner for the surgeon to work with. It also enables both surgeon and patient to see whether a transplant is needed after all.

What is also usually missing from news reports is that men's hair loss journeys have barely begun when they signs up for hair restoration procedure. They will often need to commit to using non-surgical hair loss treatment products on an ongoing basis even after surgery in order to preserve the results. This is because the existing hairs surrounding the implanted ones will continue to be susceptible to the testosterone by-product called DHT, which is what causes shedding in men who are sensitive to it. Noted hair loss mentor Spex, who has had 10 transplants and now helps people to navigate hairloss issues of their own, actually goes further than some surgeons and advises men to try a pharmaceutical treatment regime for a minimum of 12 months.

Many men, however, choose not to go down the surgical route at all not least because it is expensive, it can be painful and the initial signs of surgery are frequently impossible to hide. For some days after the operation there is visible evidence of the procedure (the newly-implanted area clearly looks like it has been subject to surgery), meaning that unless you can hide yourself away or constantly wear a hat for a while, everyone will know. 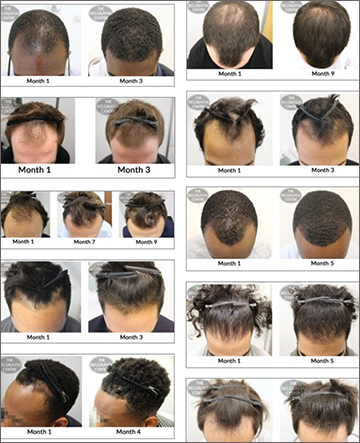 
At Belgravia who do not provide transplants each client’s dedicated hair loss specialist will recommend a custom treatment programme based on their level and pattern of thinning, as well as their medical profile and lifestyle needs. These are usually based around finasteride 1mg and minoxidil - one or both - which are currently the only two MHRA licensed and FDA approved drugs for male hair loss.

Topical applications of high strength minoxidil can be used to stimulate the follicles and encourage hair growth. This dose-dependent drug comes in a number of formulations and can be particularly useful when treating a receding hairline or a thinning crown. Additionally, those deemed medically-suitable who are aged 18 or over also have the option of taking the once-a-day DHT-blocking tablet finasteride 1mg, either on its own or in tandem with minoxidil.

The advantage of a non-surgical hair loss solution, such as that provided by the options outlined above, used with or without additional hair growth supporting products, is that it can be followed discreetly.

Though browsing Success Story photographs of clients before and after starting their custom courses may clearly show a marked difference, the change happens gradually and without sudden telltale signs appearing.

One thing that such a glut of surgical hair restoration stories may be doing is giving young men the impression that a transplant operation is an easy fix for anyone whose hair is thinning. In fact, most surgeons consider 26 to be the minimum age that a man should consider having one. Ashley Ward's surgeon  Belgravia’s hair transplant partner, the highly respected and award-winning Dr Bessam Farjo  recommends men wait until they're at least 30 years of age before booking themselves in for surgery.

One positive of all the media reports about men who have had hair transplants is that it is a reminder that male hair loss does not have to be the life-changing event it once was: steps can be taken to deal with it. There is clearly no denying the power of a celebrity boost, however, and when people like BGT winner George Sampson and serial reality TV star Calum Best (who has had three hair surgeries and cannot have any more) have so publicly endorsed the procedure it is little wonder that in a recent poll by the Express, 82% of respondents said that they would consider a hair transplant to save their hair. It is worth fully exploring all potential hair loss solutions and taking expert advice before making the decision as to whether surgery, or any other form of treatment, is the right choice for you.