Androgenic Alopecia, or male pattern baldness, is a very common condition, experienced by more than two-thirds of men over the course of their lives - with the likelihood of hair loss increasing with age. Androgenic Alopecia is caused by elevated levels of the hormone DHT (Dihydrotestosterone), which is produced by the interaction of the hormone testosterone and the enzyme 5-alpha reductase, in the blood. 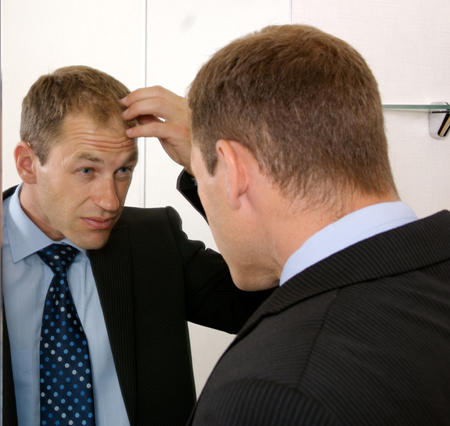 Male pattern baldness is widely thought to be genetically determined. It can start as young as 20 years of age, but more commonly occurs amongst men between the ages of 25 and 35; after which point, 2 in every 5 men will have begun to experience some hair loss. If you are concerned about the role male pattern baldness may have in your life, it is advisable to keep an eye on your hair for the very first symptoms.

What not to look for

There are a number of common myths about early hair loss indicators these include being able to count more than twenty hairs on your brush after using it, finding hairs on your pillow in the morning, or starting to lose your hair in clumps.

The first two on this list are not seen as signs of male pattern baldness, as the condition is less about the hair you shed and more about whether or not those hairs are being replaced. In people who have Androgenic Alopecia, the hair follicles shrink, meaning that the replacement hair thins before vanishing altogether.

Losing clumps is also unlikely to be an indicator of male pattern baldness, but for a different reason. The condition generally leads to more gradual symptoms, so very drastic hair loss may well be the sign of a different kind of hair loss.

What to look for

However, there are genuine early signs that can indicate Androgenic Alopecia. These stem from the fact that as the name male pattern baldness suggests men with the condition lose their hair in a consistent way.

The first sign is a gradual retreat of hair away from the forehead in a distinctive “M” shape, known as a receding hairline. If the hairs at the base of your fringe are thinning, or being shed without being replaced, you might be suffering from Androgenic Alopecia. From there, the hair is lost from the crown of the head, leaving a distinctive bald pate, before spreading until eventually only a distinctive “horseshoe” of hair is left upon the sides and back of the head.

Male Pattern Hair Loss can appear in many different patterns however, with the possibility of general thinning around the top of the scalp or a balding patch around the crown becoming prominent.

How do I know for sure if it's Male Pattern Baldness?

The sure way to know if it's genetic is by observing whether the hair loss is all over your scalp or just on the top. Male Pattern Hair Loss will not affect the back or sides so you can be almost certain of the condition if your thinning is confined to the top of the scalp.

If you notice these symptoms, it may well save you time, effort and frustration later on if you seek professional help as soon as possible. Even proven treatments can be ineffective once you have lost all of the hair from a certain area, and we have found that those clients who see the best results are those who take action swiftly by contacting us as soon as they notice that they are losing their hair. You can view our archive of success stories and photos for hundreds of testimonials from satisfied customers.