Lyme Disease Study May Show Why Alopecia Areata Can Recur

New research has uncovered how the bacteria that causes Lyme disease, which is brought on by tick bites, can fool the body into not fighting back or preventing future occurrences.

As both Lyme disease and Alopecia Areata are autoimmune conditions, this new information may also help in understanding why alopecia areata can recur. 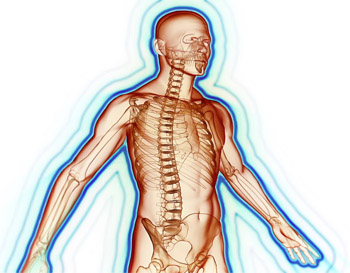 The discovery, made by a team at The University of California, Davis, found that Lyme disease bacteria tricks the immune system into not recognising it. Some people affected by the disease remain susceptible to repeat infections caused by the same bacteria and, thanks to these studies carried out on mice, we may now understand why.

Despite the immune system generating a strong initial response, the bacteria's sneaky tactics prevent any 'memory' from being formed, allowing it to stage invasions without being recognised. This renders the body unable to launch a full-blown, protective immune response or develop a long-lasting immunity to the condition.

School of Veterinary Medicine Professor, Nicole Baumgarth, who was involved in the research and, according to Fututity.org is also 'an authority on immune response to infectious diseases at the Center for Comparative Medicine at University of California, Davis', explained their findings.

"We demonstrated that an animal infected with Borrelia burgdorferi, the corkscrew-shaped bacteria that cause Lyme disease, launches only a short-lived immune response, and that protective immunity against repeat infections quickly wanes,” she said. Adding, “This study also suggests a possible mechanism responsible for the disappearance of antibodies following infection and subsequent treatment with antibiotics”. Continues after diagram. 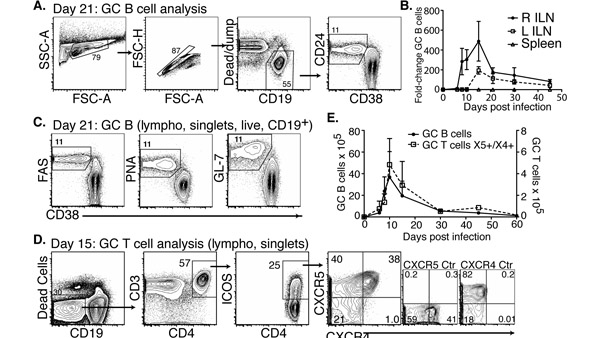 Published in the PLOS Pathogens medical journal, the study may be of significant interest to researchers looking into treatments for Alopecia Areata - particularly the harder to treat strains, Alopecia Totalis and Alopecia Universalis. Although there is no suggestion that the Borrelia burgdorferi bacteria responsible for Lyme disease is also behind alopecia, it is the immune system's reaction to it which is compelling. Existing treatments for alopecia include topical immunotherapy which involves

Researchers describe how this bacteria causes structural abnormalities to sites in the lymph nodes and other lymph tissues, known as "germinal centres". The affected areas play a critical role in generating protective immune responses.

Notably, the germinal centres failed to produce memory B and antibody-producing plasma cells, which are imperative for long-lasting immunity, for months following infection. As no 'memory' of the invading bacteria was formed, proper immune system defences were unable to prevent or guard against future attacks from the same bacteria - and even proved unable to produce a significant immune response to an influenza infection.

This ties in with Alopecia as the patchy hair loss associated with this condition can come back once the hair has regrown of its own accord, signalling that the autoimmune condition can be self-perpetuating.

Belgravia senior hair loss specialist, Leonora Doclis explains, "Tissue is destroyed in the early stages of Alopecia Areata and is then broken down. Following this, antigens are presented to immune system cells in the lymph nodes, which drafts in more self-reactive cells. This destroys more tissue which in turn produces more antigens so it becomes a cyclical process." 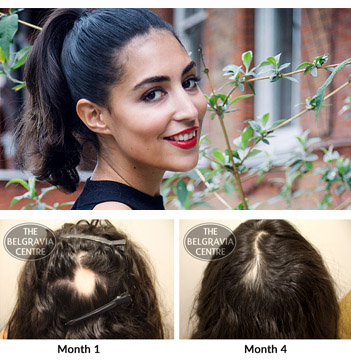 There are promising studies going on into future treatments for alopecia but these can take many years to get from the research stages to mass production.

One treatment which is currently available and has been seen to produce significant regrowth in Belgravia clients with mild-to-moderate Alopecia Areata, is minoxidil. This is applied topically to the scalp in areas where hair fall has occurred - usually in rounded patches that are oval in shape.

High strength minoxidil can help to spur on hair growth as journalist and former Belgravia Alopecia Areata treatment client, Alya Mooro (pictured) found. She was comforted not only be being able to take a proactive approach once her hair started falling out, but also by therapy sessions at our hair loss clinics. As Alya says: “Coming in to the clinic every month and applying the cream and using the shampoo and conditioner helped put the power back in my hands and helped me feel like I was doing something to ameliorate my situation.”