An Indian boy who attended his local hospital to see if they could help with his hair loss was told by doctors that he didn’t have Alopecia Areata, as he may have first suspected, but an entirely different autoimmune disorder named Lupus Panniculitis.

Lupus describes a number of conditions in which inflammation affects the body, with Lupus Panniculitis (LP) being a less common variant of Systemic Lupus Erythematosus (SLE).

SLE is a condition which can affect up to 1 in 2,000 people and which often causes permanent hair loss from scarring alopecia. In cases of LP, it is the deep dermis and subcutaneous fat cells that are attacked by the body. This can also cause hair loss, however, according to a new case study it is a much rarer form and non-scarring.

The Indian boy, who is 17, presented to the Department of Dermatology at Manipur’s Institute of Medical Sciences with a history of hairless patches on the scalp that had been troubling him for seven years. While the balding certainly bore some similarities to that often seen in cases of Alopecia Areata, the shape of the patch was unusual, being linear instead of round, as can be seen in the Month 1 image below. Writing about their findings in the Indian Journal of Dermatology, the authors state that “only a few cases of linear alopecia have been reported in medical literature.” Continues below 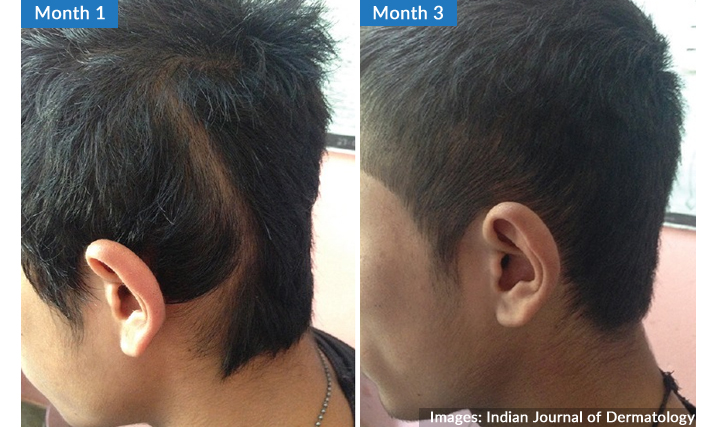 Skin biopsies led the doctors to diagnose the hair loss as a rare and unique manifestation of Lupus Panniculitis. According to the medical team's case study notes, the patient was given oral prednisolone 20mg and oral hydroxychloroquine 200mg twice daily to try and treat the condition. The shots from before and after starting treatment, pictured above, suggest a very good recovery.

Now the doctors are suggesting that Lupus Panniculitis should be considered as a differential in a case of non-scarring alopecia of any shape.

One of many possible symptoms

Hair loss as a manifestation of Systemic Lupus Erythematosus is seen from time to time (more commonly among women), and is one of a number of possible symptoms of the condition, alongside red or pink rashes on the nose and cheeks, swollen glands, fevers and painful joints.

In cases of Systemic Lupus Erythematosus, the hair loss can be seen as a diffuse thinning or as more patchy hair loss meaning it would not be unusual for it to be mistaken for Alopecia Areata at first glance. However, the scarring, or cicatricial alopecia caused by SLE is permanent due to the hair follicles being destroyed by inflammation. Bald patches caused by autoimmune hair loss will generally regrow hair of their own accord in time. Treatment for Alopecia Areata is also possible and can help to speed this regrowth along.

Lupus’ specific treatment needs highlight yet again why it is so important to always get an expert diagnosis in cases of hair loss.

Illnesses That Can Cause Hair Loss

Illnesses That Can Cause Hair Loss