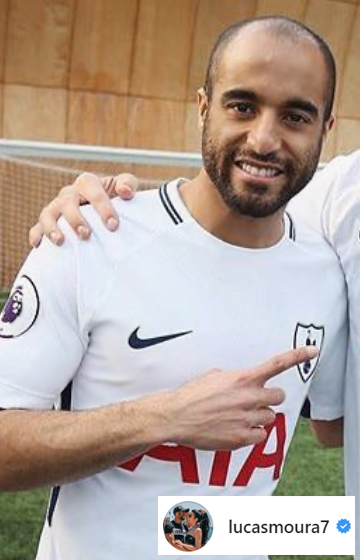 Brazilian footballer Lucas Moura is clearly used to being asked about his hair loss.

The Tottenham Hotspur midfielder, at 25 years of age, is clearly in the grip of Male Pattern Baldness, with his thinning hair frequently prompting social media posts tagging in The Belgravia Centre.

When asked to interview himself for Brazil's ESPN sports news channel, the first topic he chose was discussing his receding hairline.

“So, what happened, it was the family, right? My father, my brother, everyone bald. And it’s like, Europe too. Everyone thinks it’s a thousand wonders, but there’s that stress too, ends up bringing our head down.”

Brazil international and Manchester City player Danilo doesn't seem to be affected in the same way, and whilst his teammate Fernandinho may have a shaved head, his scalp stubble suggests this may be a style choice given there are no clear signs of thinning.

Certainly the plentiful curls of other fellow Brazilian footballers in the Premier League, such as Chelsea's David Luiz and Willian may seem to disprove this argument, there is actually some truth to it. In fact, we speculated that this may be exactly why Lucas Moura's hair loss was happening back in March 2017, when he was still playing in France.


As Moura acknowledges, Male Pattern Baldness is an hereditary condition which can be passed on by either parent. It can start any time following puberty but may also skip a generation - when it does this, the genetic predisposition is still present but simply remains inactive, and can therefore still be passed on. 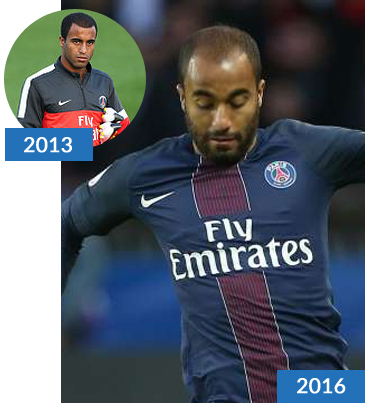 This permanent hair loss condition is caused by an inherited sensitivity to a testosterone byproduct known as dihydrotestosterone (DHT) which affects the follicles located along the top of the scalp from the hairline and temples to the crown. The DHT binds to them, gradually weakening them and producing increasingly thinning hair, which then leads to hair fall and can cause baldness.

The onset age and the rate at which hair sheds varies from person to person. There are a number of factors known to influence this, however, including various lifestyle and environmental elements which can accelerate men's hair loss.

One of the key issues - as Lucas Moura rightly points out - is stress. This can be physical stress, such as strain placed on the body due to an underlying illness, injury or even from every day issues such as nutritional issues. It can also be caused by emotional stress - the feeling of being under pressure and stressed out - which seems to be the type of stress Moura refers to when talking about playing in Europe.

The scrutiny top flight footballers come under from fans and the media, as well as their own club, can be immense both on and off the pitch. Regardless of how much he is paid for the privilege, being screamed at by the Wembley crowd, where Spurs have been playing their home games since Moura joined the team in January 2018 while their new stadium is being completed, must be pretty daunting.

His previous five years at Paris Saint-Germain, where he was the French club's most expensive signing, must have also placed a lot of responsibility on his young shoulders. Looking at photos of him when he first joined PSG compared to when he left, his hairline and hair density deteriorated massively during this period.

Therefore, a combination of genetics and exacerbating stressful factors is highly likely to be the reason Lucas Moura has been losing his hair fairly rapidly in recent years despite still being just a couple of weeks away from his 26th birthday.


Given his age and pattern of shedding, which appears to centre around thinning on top along his vertex, coupled with a receding hairline, Belgravia hair specialists consider his hair loss to be at a stage where it could still be treated, it he wanted to go down that route. That said, his shaved haircut suits him so he may well be happy to stick with the aerodynamic style - whether or not a man wants to try to retain or regrow his hair is, after all, an incredibly personal decision. 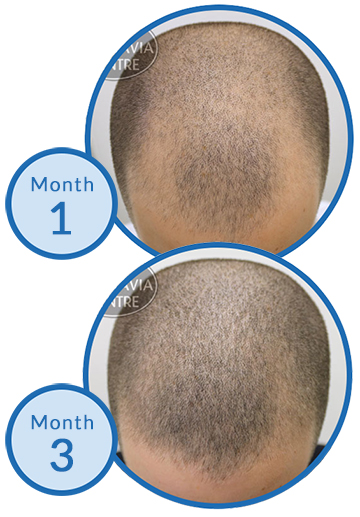 
As long as the hair follicles are still active and capable of producing hairs - no matter whether they are thinning - hair loss treatment is an option, assuming the user is also deemed medically suitable. Once the hair has gone past this point, and the smooth, shiny signs of baldness creep in, surgical intervention in the form of a hair transplant comes into play as the most suitable option. Catching it early on, or at least whilst the hair follicles still function normally, means non-surgical options can be explored.

There are two clinically-proven topical and oral hair loss solutions, licensed by the MHRA - the UK's medical regulatory board - as well as being approved by it's US equivalent, the FDA. Non-invasive male pattern hair loss treatment courses often comprise these medications in order to block DHT, promote normal healthy hair growth and - with on-going use - assist in preventing baldness. These can be used individually, but men often also use them together as part of a two-pronged attack.

Supplementary hair growth supporting products, from highly-targeted food supplements, to laser therapy can be employed in addition to these treatments and an experienced hair specialist will be able to recommend appropriate options based on their consultation with the individual.

One key piece of advice it is worth considering for anyone wanting to get the most out of their treatment course is to try various stress management exercises - from physical exercise or meditation to spending more time relaxing with friends and getting enough sleep - in order to minimise the negative effects every stress can otherwise have on the hair. He can't help his genetics but maybe Lucas Moura could try that favourite footballers' hobby, golf, to help him de-stress...

Calls for Research Into Connection Between Football and Hair Loss

Calls for Research Into Connection Between Football and Hair Loss

Is Stress Hair Loss Temporary And Will It Grow Back On Its Own?'

Is Stress Hair Loss Temporary And Will It Grow Back On Its Own?'