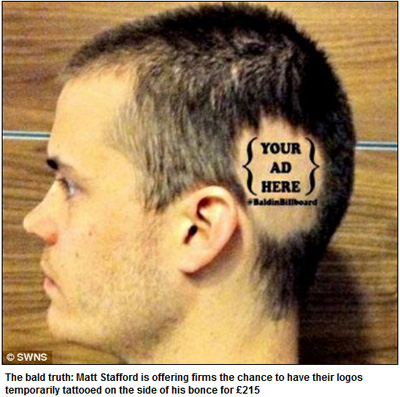 When people start to lose their hair, their reaction and the steps they take can vary. But it’s safe to say that few are as enterprising over their hair loss as 26-year-old Matt Stafford.

A copywriter based in London, Mr Stafford recently discovered that he had a number of bald patches. After going to the doctor’s he was diagnosed with stress-induced Alopecia Areata, a hairloss condition caused by a dysfunction of the auto-immune system.

Rather than despair, Mr Stafford decided to make the most of the situation, in a highly innovative way: by selling advertising space on the side of his head! Companies can bid to have their logos tattooed, temporarily, on his bald patch.

Dubbing himself the ‘Balding Billboard’, he began selling his scalp space on eBay as ‘Human Advertising Space’, for a week at a time. The eBay ad reads: “You are bidding for prime advertising space on the left side of a balding creative man’s skull,” and describes the scalp as, “in good condition with minor dandruff.”

Mr Stafford has already sold the first advertising slot on his bald patch, for £215. However he will not be keeping the money himself, as he plans to donate all money to the Little Princess Trust, a charity which helps children suffering from hair loss, and which The Belgravia Centre also supports.

He told the Daily Mail that losing his hair “made me think how I can turn a negative into a positive. I want to get in people’s faces and spread the message about the Little Princess Trust. It was one of those things where if I can help someone else out then I will.”

As part of the deal, he has agreed not to wear a hat or any kind of headwear during the period for which he is advertising. In the small print meanwhile, the ad says, “The [Balding Billboard] will wear whatever ad you submit as long as it isn’t something offensive...”

Alopecia Areata is a hair loss condition which affects both men and women of all ages, though it often occurs for the first time during a person’s youth or twenties. It begins with patchy hairloss and in few cases can progress to total hair loss on the scalp (Alopecia Totalis), or the entire body, including eyebrows (Alopecia Universalis).

The exact cause of Alopecia remains unknown but it is thought to be triggered by stressful and traumatic events. The condition causes the body’s own immune system to systematically attack healthy hair follicles, leading to hair loss.

Mr Stafford has been very bold in drawing attention to his bald patches for a good cause, but many people suffering from Alopecia would rather take action to prevent further hair loss and re-grow their lost hair.

Belgravia has helped many people to deal with this type of hair loss. Our experts create individually tailored Alopecia Areata treatment programmes, personalised to each individual client. High strength minoxidil has shown itself to be very successful in regrowing hair for patchy alopecia.

To find out more about how we can help treat your hair loss, contact us today for a consultation, or fill in our online diagnostic form for a home-use treatment programme that we can post anywhere in the world.

Anyone interested in purchasing ad space on the ‘Balding Billboard’ meanwhile should check out Mr Stafford’s eBay listing.