A small study in the US has revealed that low level laser therapy (LLLT) on people with chemotherapy-induced hair loss may be an effective way to speed up regrowth.

Raymond Lanzafame, director for the American Society for Laser Medicine and Surgery, announced the results of the study at the 37th Annual Conference of the society last month, declaring that they were “more dramatic than we expected.”

He and fellow researchers had posited that low level laser therapy, a proven way of encouraging hair regrowth for the genetic conditions Male Pattern Baldness and Female Pattern Hair Loss, might also work on people whose shedding was caused by cancer drugs. 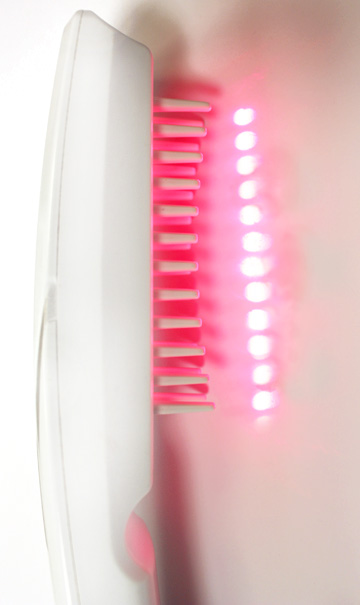 According to Oncology Nursing News, the study involved 11 female patients who were being treated for breast cancer and who had completed adjuvant chemotherapy treatment less than four weeks earlier. A patch of their head was shaven to 3mm in length and the number of hairs was counted. The women were split into two groups active and placebo and their median baseline hair counts was recorded as 36.5 (active group) and 54.6 (placebo group).

Over the next 12 weeks, the two cohorts were instructed to use a special helmet-like device for 25 minutes every other day. In the placebo group, this was merely fitted with regular incandescent lights; the other group, however, was using a device equipped with 5 milliwatt lasers and 30 LEDs. There are several such devices on the market in the States, and the one used in this particular study is called the iGrow.

The results were indeed encouraging. After 12 weeks, the six women in the active group saw their median hair count rise from 36.5 to 259.8 a far more impressive figure than the five-strong placebo group which recorded an increase from 54.6 to 199.4.

After a further 12 weeks, these counts rose to 283.5 and 236.3, respectively. The results suggest that in the first few months after chemotherapy, LLLT could play a role in boosting hair growth.

Quoted in Oncology Nursing News, Jeff Braile, the president of Apira Science who make the iGrow helmet, said: “We’ve known for some time that red light effectively treats androgenetic alopecia, but to witness that it can have a similar effect on chemotherapy-induced hair loss is groundbreaking.”

The researchers now hope to recruit a larger study group to see if they can repeat these findings in a much more wide-reaching trial.

One thing that was perhaps overlooked in the reporting of this small study is that hair lost to chemotherapy drugs does usually grow back of its own accord, and often fairly quickly. The results of the placebo group clearly illustrate this.

When the thought of losing hair is a major concern as it is to most women then a visit to a hair loss clinic is a good way to understand how quickly hair might be expected to grow back, and also find out what products may be taken to try and speed this up.

Luckily, many cancer patients today are offered a pre-emptive treatment option in hospital which is known as a cold cap. This is worn during chemotherapy and helps to chill the scalp during treatment, and it means that in many cases people will keep their hair during chemo.

LLLT devices have been around for a number of years now, and Belgravia clients are frequently offered one named the HairMax LaserComb as part of their treatment course: it was the first of its kind to be FDA-cleared for use on genetic hair loss. The LaserComb also has a patented mechanism related to its comb design that allows the light to penetrate straight to the scalp, thus making it potentially more effective than helmet-based devices whose lights can sometimes get blocked by the hair.

Currently, Belgravia recommends that anyone opting to use hair loss treatments to help grow their hair back following cancer treatment - assuming their oncologist provides written confirmation that they are suitable and clear to go ahead - does not use a LaserComb or other LLLT device.

Can I Use Hair Loss Treatment After Chemotherapy?'

Can I Use Hair Loss Treatment After Chemotherapy?'