In the late 90s, you couldn’t move for 20-something men sporting a shaved head, but today it’s a style mostly associated with balding men who want to disguise their receding hairline.

One such shaven-headed man with possible hair loss is footballer Martin Skrtel, whose grade-1 (or less) cut throughout his recent playing career was assumed by many fans to be the smartest hairstyle option open to him if he wanted to keep thinning locks hidden.

Little wonder, then, that Liverpool fans were left open mouthed when the Slovakian centre back re-emerged after injury this week sporting a full head of hair. 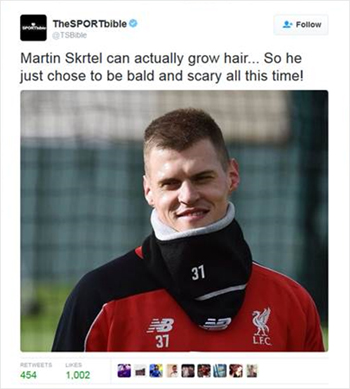 Assumed he was bald


“We wrongly assumed he had rocked a smooth head because he was bald,” wrote Liverpool fan site Empire Of The Kop, “or at least possessing a dodgy receding hairline but it turns out the Slovakian’s been able to grow his barnet all along!”

Because Skrtel has been off with a sick note since before Christmas because of a leg injury, however, many fans have taken to social media to suggest that he has, in fact, been MIA because he was actually having a hair transplant.

A common refrain is that he has “done a Rooney” a reference to Manchester United ace Wayne Rooney who has undergone at least two hair transplants in his efforts to counter the effects of Male Pattern Baldness. Or perhaps Liverpool manager Jurgen Klopp gave him his surgeon's number.

Whilst a hair restoration procedure, if indeed he had been worried about hair loss, would have been one option: he is older than 25 the minimum age many hair transplant surgeons recommend for the operation and his reputed £70,000 a week salary would make the operation’s £6,000+ price-tag seem positively trifling, it is unlikely he would have seen such thick regrowth so quickly following a transplant operation.

Clearly big news in football circles, Skrtel’s new hair was even the subject of a Daily Mirror poll in which readers were asked if they thought he looked “fetching” with his new style, or if they felt he should “shave it off again, before he destroys us all.” Somewhat inconclusively, the results showed a precise 50/50 split. 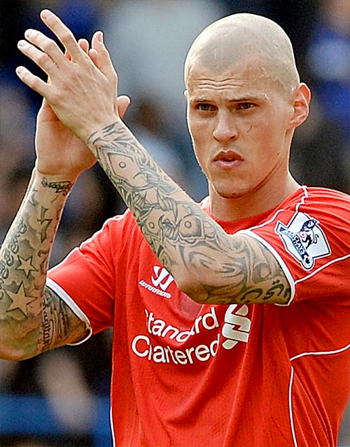 
A close inspection of pre-hair Skrtel pictures suggests a man with a strong widow's peak hairline  though his hair was so closely shaven it is hard to tell whilst older pictures from his pre-Merseyside playing career demonstrate no signs of hair loss whatsoever.

Now aged 31, however, the player is in prime Male Pattern Baldness territory. This genetic hair loss condition is the most prevalent in the world and, whilst it can affect men from their late teenage years onwards, it is most likely to become prominent in their late twenties to thirties, putting Skrtel firmly in the right ball park.

Age is only a guideline, however, it is not the reason one develops pattern hair loss; the telltale thinning hair and receding are actually caused by a genetic sensitivity to the hormone byproduct DHT, which is inherited.

Whilst some men - and women - may carry the relevant genes, they may be dormant, so they can pass them on without having any hairloss themselves. In those whose sensitivity is active, the DHT will attack the follicles located around the top of the head causing them to produce increasingly thinner and weaker hair, which can eventually lead to baldness in men.

There are two clinically-proven, MHRA licensed and FDA approved products for the treatment of male pattern baldness which many men use not just to regrow hair, but also to prevent hair loss from becoming noticeable to others. When treatment is started early enough when the first signs start to become noticeable, it may be possible to stabilise shedding, promote and maintain regrowth without anyone even noticing you were losing your hair in the first place.

If Arsenal manager Arsene Wenger is to be believed, many footballers already use hair loss treatments so there is always the possibility that Skrtel is among their ranks, and used his paid sick leave as the perfect window of opportunity to grow his hair and show off his results. Whatever the reason behind Skrtel's hair debut, for now at least looks like hair loss is not a challenge this famously hard-tackler will be losing.