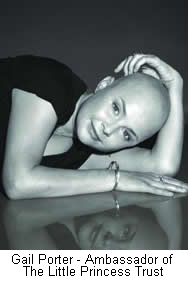 While hair loss is generally seen as a condition which affects older people, many children also lose their hair, either as a result of cancer treatments or due to autoimmune conditions such as Alopecia.

The Little Princess Trust is an organisation which was set up four years ago to help children suffering from hair loss, and to provide them with real hair wigs so that they can continue with their childhoods normally.

In the short time it has been operating, the charity has gained a remarkable amount of support from both celebrities and the general public, as well as from The Belgravia Centre. The Trust’s ambassador is television presenter Gail Porter, who famously suffers from Alopecia Universalis, while author Chris Ryan and journalist Quentin Letts are both honorary vice-presidents.

In addition to this support, increasing numbers of ordinary people are stepping up to raise both money and awareness for the hair loss charity, with many fundraising events already lined up for 2011.

Raising money through skydives and haircuts

Last month, a Hereford woman celebrated her 40th birthday in dramatic style by jumping out of a plane to raise money for the hair loss charity. Speaking to the Hereford Times newspaper, Michelle Johnson said, “I wanted to do something to start my 40s off.”

In mid-February meanwhile, twelve year old Paisley is planning to donate her hair to the Little Princess Trust, after finding out about it during her own bout of Alopecia two years ago. On the charity’s website, Paisley’s mother is quoted as saying: “We are very proud of her and although we’ll be sad to see her hair go we’re really happy to know that it will go to another child who has lost theirs.”

In March, Ben Sperry and Jay Carter intend to raise “at least £1000,” for Little Princess Trust by skydiving from a height of 12,000 feet in Kent.

One previous event which has gained a lot of publicity for the charity is the ‘Pink Car Rally,’ which has been held annually for the past three years.

Started by Salli Gray, the proud owner of a pink Nissan Micra, the event sees dozens of pink vehicles of all shapes and sizes driving across the country to raise money and awareness for the trust. A date for this year’s event has not yet been proposed, but Ms Gray hopes to organise a fifth anniversary Pink Car Rally in 2012 which will run from John O’ Groats to Land’s End.

In October of last year, the Little Princess Trust announced that it had reached its initial £130,000 fundraising target. Wendy Tarplee, one of the charity’s founders said: “We are absolutely thrilled and cannot believe such a big target has been met in such a short time ... It means we can help lots of children in the near future and hopefully cut waiting times.”

Wendy and her husband Simon started the charity after the loss of their daughter Hannah to cancer in 2005. After experiencing first-hand how difficult it was to find a good quality children’s wig for their daughter when she lost her hair due to chemotherapy, they decided to start the Little Princess Trust to help others in a similar situation.

Please visit the Little Princess Trust's website for more information on what you can do to help or to make a donation.