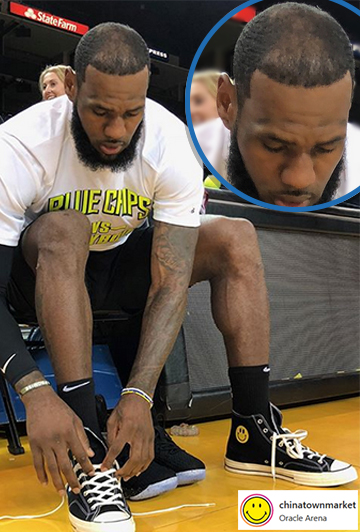 Basketball superstar LeBron James showed off more than just his sporting prowess as the NBA Finals 2018 got underway.

During a practice session the 33 year old power forward for the Cleveland Cavaliers was spotted with his on-again, off-again hair loss clearly visible along the top of his scalp.


After years of jibes from sports fans, the media and basketball commentators, in 2017 LeBron admitted he was experiencing hair loss. Not that it needed saying, not least given the three-time NBA MVP winner's battle with Male Pattern Baldness was already so famous it was documented in video games.

King James' has been sporting a thicker head of hair than usual of late in press conferences and for off-court appearances, at least. However, with the pressure of winning his potential fourth NBA Championships title upon him, and perhaps after seeing that, after tax, the $33.2 million per year player only received half his actual salary (we're sure the struggle is real), could stress-related hair loss be a factor in this thinning? It's unlikely - yet, at least.

There are two key reasons why this is such a remote possibility: firstly, thinning hair caused by stress tends to affect the whole scalp fairly equally, rather than just the top as in cases of Male Pattern Hair Loss. Secondly, stress-induced shedding takes around three months to present so whilst this is unlikely to be the cause of LeBron's hairloss now, given that J.R. Smith blunder, we'd check back in with James' hairline around September... Continues below...
via GIPHY


Lebron James is displaying one of the classic signs of Male Pattern Hair Loss - thinning hair on top, otherwise known as vertex hairloss. The hereditary condition causes a genetic sensitivity to the testosterone-derivative dihydrotestosterone (DHT) which attaches to the affected follicles inciting follicular miniaturisation, leading to increasingly thinner hair, hair loss and can cause eventual baldness. 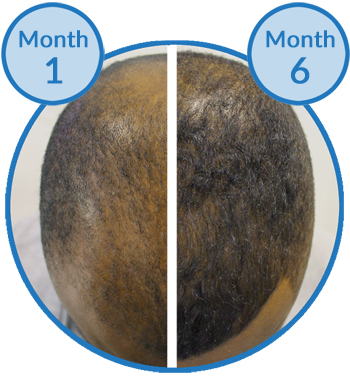 
Genetic hair loss affects the follicles located along the vertex and temporal areas and can therefore cause a thinning crown, a receding hairline, thinning all the way along the top, or a combination of these patterns. Whilst King James' crown and hairline seem to be relatively intact, his vertex is clearly being affected. This is particularly intriguing - at least for those of us in the hair loss industry - given the Ohioan has previously had issues with his hairline, with thinning edges being clearly visible on his 2013 Sports Illustrated cover.

Though LeBron's hairdresser has previously claimed the 6ft 8in star has all his own hair, but this would still be the case even if the star had - as has been rumoured - had a hair transplant. So, if he did undergo hair restoration to fill in his edges, whilst those newly-grafted hairs would be immune to the effects of DHT, the rest of the hairs in the at-risk areas of his vertex would still be affected.

if he did not then follow this up with proper aftercare - using clinically-proven hair loss treatments designed to encourage hair growth and prevent baldness - the remaining original hairs in the DHT-sensitive areas would still continue to miniaturise. This may be one explanation as to why LeBron's receding hairline appears to have recovered while his hair loss on top has worsened.

For anyone with a similar pattern of shedding to LeBron, there are MHRA-licensed and FDA-approved topical and oral options which, at Belgravia, can form the cornerstone of a tailored plan, alongside key products designed to support healthy hair growth. The first step in exploring personalised hair loss solutions is to have a professional consultation as, from this - whether in-clinic or online - a dedicated specialist can provide bespoke recommendations based on each individual's level and pattern of shedding, as well as their medical profile and lifestyle requirements.