Kids Hair Loss Charity Needs Your Votes to Win Charity of the Year! 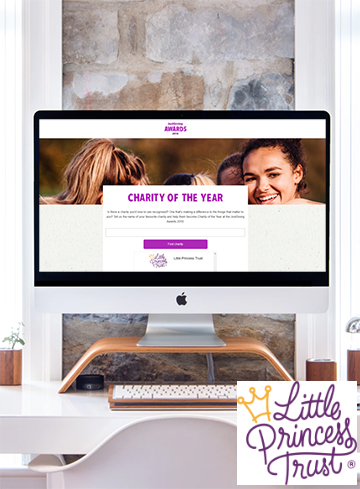 This much-loved UK children's hair loss charity announced on 20th September that it had made the top ten finalists for Charity of the Year in the JustGiving Awards 2018. Supporters of Little Princess Trust are being asked to vote! vote! vote! to help them win the crowdfunding platform's coveted title.

The Hertfordshire-based organisation provides real-hair wigs, free of charge, to children - both girls and boys - with medical hair loss. This is often caused by cancer treatment or forms of the autoimmune disorder Alopecia Areata where the body attacks the follicles in hair-bearing areas of the head and body, to varying degrees of severity. This can cause anything from patchy hairloss on the scalp only, to baldness of the head - including losing eyebrows and eyelashes - to all hair falling out from head to toe.

Through constant fundraising, as well as accepting hair donations, the charity manages to both produce and distribute these wigs without any charge to the children or their family. It also funds medical research carried out by its partner, the Children's Cancer & Leukaemia Group. In July 2018 the charity confirmed its latest contribution of £520,000 towards investigating cancer in children, teenagers and young people, including the potential of treatments which are less aggressive towards the rest of the body.

Some of its high profile supporters include Harry Styles and HRH Catherine, Duchess of Cambridge, who have both donated their hair to be woven into wigs for those in need, as well as Manchester City FC whose players have lent their support to the boys' division of Little Princess Trust, Hero by LPT.

A number of Belgravia staff have also donated their ponytails to the charity, and even a Belgravia client who had regrown her hair after using a custom Alopecia Areata Treatment course for the scalp-only form, sent them 12 inches of her glossy hair.

Voting is taking place online - click here to vote - and closes on 26th September 2018. This small charity is urging everyone to vote for them as they have some stiff competition from bigger organisations such as Cancer Research UK and the NSPCC who have far larger followings and resources.

Although no monetary prize is advertised, the profile boost that publicity from winning the award would bring is likely to mean increased contributions and awareness from the public - rewards which are invaluable to smaller organisations.

We've voted for Little Princess Trust and we hope you do too!

UPDATE [22/11/2018]: Although Little Princess Trust did not win, thanks to all their votes, the charity did make the Top Ten at the 2018 JustGiving Awards.