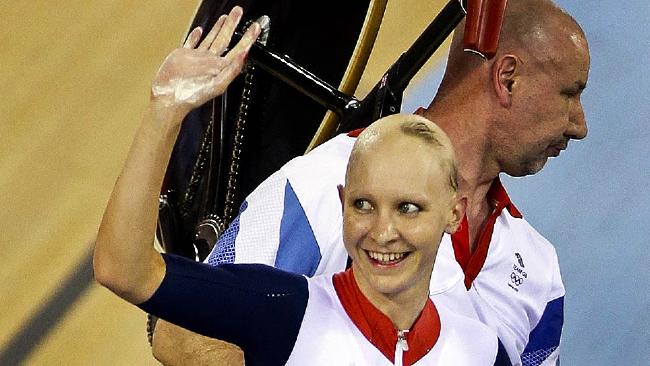 After winning the Olympic gold medal for her part in the cycling team pursuit event, Joanna Rowsell has proudly announced that much of her success is derived from a hair loss condition known as Alopecia Areata. Rowsell has lost almost all of her hair as a result of Alopecia Areata, but claims that her desire to win was the motivating factor behind her cycling success, which in turn helped her battle through the blow to her confidence in her physical appearance.

Following the completion of the race, Rowsell happily completed a lap of honour without her helmet, proudly displaying her almost completely baldhead.

However, although raising awareness is important, Rowsell seems to be far more interested in showing what people with Alopecia Areata can achieve. Speaking to the UK Press Association after the race, she said, “I hope I can be an inspiration to other girls with the condition.”

Not the first hairless Olympian

Rowsell is not the first British Olympian to experience hair loss due to Alopecia Areata. The completely hairless champion swimmer Duncan Goodhew also won a gold medal at the Moscow Olympics back in 1980.

Unlike Rowsell, whose hair fell out without any apparent trigger, Goodhew’s can be traced to a particular incident in his youth. At the age of 10, Goodhew fell 18 feet from a tree and damaged a nerve in his lip. This was enough to trigger an unusual auto immune response which led to him losing all of his hair.

Just like Joanna Rowsell, Duncan Goodhew saw sport and the Olympics particularly, as a way to overcome his perceived disadvantages - and there are few better ways to do so than to win Olympic Gold!

Alopecia Areata does not always result in total hair loss

From photographs of Joanna Rowsell and Duncan Goodhew, it would be easy to assume that Alopecia Areata always results in total baldness. However, the condition often manifests in the form of patchy hair loss, and only the most extreme cases result in the complete loss of hair on the head.

However, patchy hair loss can be often just as distressing for men and women as total baldness, particularly when it occurs for no apparent reason. For people affected by hair loss, great reassurance can be drawn from the delivery of an accurate diagnosis of their condition. As such, we strongly recommend that any man or woman, Olympian or otherwise, concerned about patchy hair loss should arrange a consultation with a suitable qualified hair loss professional at the earliest possible opportunity.

Hair loss caused by Alopecia Areata can be treated successfully in a number of cases, but the sooner treatment is begun the better. Call us today on 0800 077 6666 or contact us online to arrange a free consultation, or if you can't make it into the clinic, complete our online diagnostic for a bespoke hair loss treatment programme that can be delivered to you in the post.