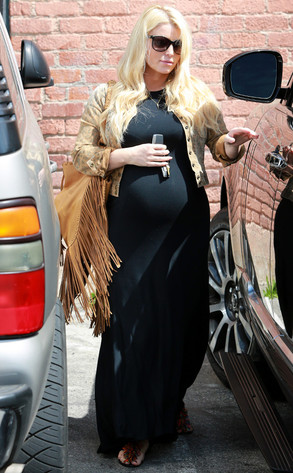 Jessica Simpson, reality TV star and singer, has been pictured out and about recently in her home town of Beverly Hills with a baby bump that looks ready to explode! The heavily pregnant star, who is expecting her second child with fiancé Eric Johnson, joins Kim Kardashian and Kate Middleton in the ranks of pregnant female celebs, though Simpson is undoubtedly the woman who will be giving birth first.

There have also been rumours swirling around this week regarding Simpson's long blonde locks. A self proclaimed "insider" has allegedly revealed to Star magazine that Simpson is experiencing hair loss, saying: “She’s not going bald, but she’s starting to freak out...Her hair is almost as famous as she is!”

Sceptical Of The Source

According to the magazine: “Jessica’s doc explained that the hair loss is a side effect of hormonal changes in moms-to-be.” The supposed “insider” goes on to reveal that: “She didn't experience hair loss with her first pregnancy, so she’s relieved and is using a shampoo that the doctor recommended.”

However, hair loss during pregnancy is actually quite unusual; it is far more likely to occur after the baby has been born, in the form of postpartum alopecia that occurs two to four months after the mother has given birth. To understand why this happens, you need to understand the growth phases of hair.

Normally, hairs begin in the growth phase, which takes between two to eight years, then the resting phase (about three months) and the shedding phase, where the hair falls out. During pregnancy, hormonal changes result in an increase in the amount of time that hairs remain in the growth phase, leading hair to look thicker, the very opposite of what the source claimed was happening to Simpson.

So, unlike the average person who sheds around a hundred hairs a day, a pregnant woman usually sheds less than fifty. However, after pregnancy, the excess hair sheds, which can be alarming for the woman if she's unaware of the reason behind the hair loss. Usually, after six months hair will return to normal, but sometimes it doesn't, at which point other potential reasons behind the hair loss may need to be investigated.

When Hair Doesn't Grow Back

Stress, lifestyle changes and strain on the body can all result in diffuse thinning, which is hair loss on top of the head, and telogen effluvium, which is hair loss from all over the head. Both of these kinds of hair loss can be treated with minoxidil, a clinically proven medication that is licensed by the MHRA and approved by the FDA to treat hair loss.

Minoxidil is applied directly to the areas of loss, and can be varied in strength to suit the individual. For stubborn hair loss, a high strength minoxidil cream has shown brilliant results, especially when combined with azelaic acid, an added ingredient which appears to block DHT, the androgen that causes scalp follicles to shrink and produce weaker hair.

As part of a bespoke hair loss treatment programme that also includes a number of treatment boosters, minoxidil would be the best way to treat her hair should Simpson find that her post-pregnancy locks aren't their usual lustrous blonde self.