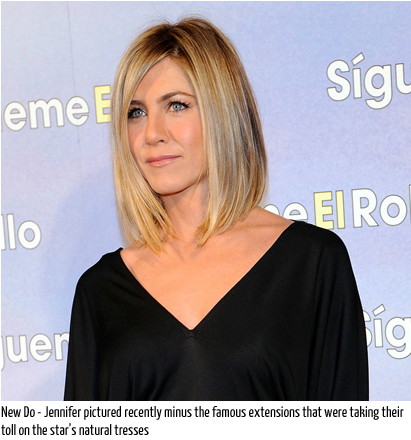 Famed for being the owner of the hairstyle of the 1990's, Jennifer Aniston has hit the headlines with her hair once more. The 42-year-old Hollywood star and former wife of Brad Pitt has admitted that a dramatic change of hairstyle earlier in the year was caused by damage and hair loss incurred through the wearing of hair extensions.

Jennifer Aniston first came to prominence through her portrayal of the glamorous girl next door Rachel in the hit comedy ‘Friends’. Such was the popularity of Friends that women the world over attempted to emulate the legendary ‘Rachel’ haircut, making it an icon of the period. Aniston herself is far more dismissive of the hairstyle, once describing it as the ‘ugliest haircut (she’d) ever seen’.

At the end of a decade-long run in Friends in 2004, Jennifer Aniston made the permanent transition to the big screen with a role opposite Clive Owen in Derailed. Other roles since have included parts in ‘The Break-Up’, ‘The Bounty Hunter’ and most recently ‘Horrible Bosses’.

What was the Problem?

In an interview with American cable news channel MSNBC, Aniston explained that her use of extensions had damaged her own her to such a degree that it was no longer repairable. "The real reason I cut my hair? My real hair was getting thinned out again from all the extensions," said Jennifer, "It was starting to look fake." 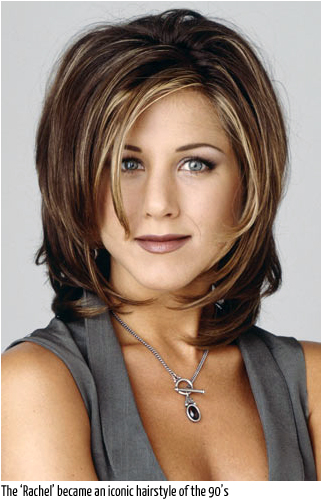 Faced with the choice of using yet more extensions to cover the damage, or to literally cut her losses, Aniston chose the latter. Despite several gossip column inches being dedicated to the dramatic hair length changes in the middle of the promotional activities for her movie “Just Go With It”, Aniston maintains she made the right choice. The furore seems to have been caused by Aniston’s previous reluctance to change hairstyles for years, making the transformation from shoulder length locks to trendy bob all the more noticeable.

Hair extensions have received a lot of attention over the past year as more and more celebrities encounter problematic side effects associated with long term use. Aniston is the latest high profile woman to have issues, following in the footsteps of Colleen Rooney, Katie Price and Serena Williams among others, all of whom have been photographed showing significant patchy hair loss.

Hair loss experts are keen to point out that occasional wearing of hair weaves and extensions should have no long lasting negative effects, but that sustained and continuous usage can result in similar problems. Aniston’s confession to MSNBC reveals her dilemma and regret fortunately she appears to have been able to resolve the situation before losing large patches of hair.

It’s not only celebrities: any woman using similar products on a constant basis is open to the same hair damage and loss. The bonding glue used to attach hair extensions can strip hair of its protective layers, whilst the additional weight of synthetic hair can place pressure on hair follicles, causing the ‘real’ hair to fall out.

Most problematic of all are extensions based around weaves which use tiny braids to hold extensions against the wearer’s scalp. Weaves place the wearer’s hair under tension, before adding the additional weight of the extension. This combination of weight and tension places strain on the wearer’s hair follicles, stretching them and causing hair to fall out. Known as Traction Alopecia, hair which is pulled out in this way can cause permanent damage to hair follicles and prevent hair regrowth.

For any woman experiencing hair loss and damage caused by hair extensions, the first course of action has to be removal of the artificial hair integrations as soon as possible. Many women find that the damage renders their own hair unsightly and would prefer to cover it with further extensions unfortunately this will make the problem worse and should be avoided at all costs to prevent permanent hair loss.

If the damage is less than extensive, for many women a trip to a professional hair stylist should be enough to correct appearance and prevent further shedding. Often the woman in question may require a fairly dramatic change in style like Jennifer Aniston, to remove damaged hair, but over the long term her hair will grow back normally and healthily without having to resort to medical intervention.

When a Haircut Will Not Suffice

Sometimes hair loss and damage caused by extensions and weaves cannot be corrected with a simple change of hairstyle. For women who have discernible patches of thinning hair, a trip to a hair loss specialist is recommended.

At The Belgravia Centre we see many women who have experienced patchy hair loss as a direct result of overuse of hair extensions and offer a number of highly successful hair loss treatments for correcting it. Using our wide experience we consider the needs of each client on a case-by-case basis to ensure that the correct treatment plan can be created for their specific needs.

Many of these treatment plans use the clinically approved Minoxidil medication which has been formulated to prevent further hair loss and promote regrowth. Minoxidil helps to increase blood flow to the scalp, ensuring that vital nutrients are delivered to hair follicles for maximum hair growth potential. It is licensed for use in Britain by the MHRA for female pattern hair loss but is also known to work well for other forms of hair loss such as traction alopecia.

Our hair loss specialists can also suggest a number of complementary therapies designed to work in conjunction with Minoxidil. Our unique HairVitalics dietary supplement contains a number of vitamins and minerals believed to help condition existing hair and prevent further thinning.

Jennifer Aniston has set exactly the right example through choosing to eschew extensions before wreaking permanent damage to her hair. So whether your hair loss is related to extensions or not, why not contact us now for a free consultation before the damage becomes worse? If you are unable to visit our London centre you can complete an online diagnostic form for a home use treatment programme sent straight to your home.