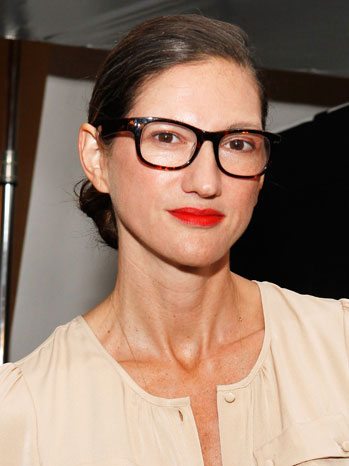 Jenna Lyons, the creative director of American fashion brand J. Crew, has spoken out about what it's like to experience a rare disorder called Bloch-Sulzberger syndrome, or Incontinentia Pigmenti (IP). IP is a genetic disorder, and can cause skin scarring, hair loss and malformed teeth.

Lyons suffers from a mild form of IP, which causes skin discolouration and means that she has to wear dentures. In extreme cases though, IP can affect the central nervous system, leading to problems such as learning disabilities and seizures. After making these revelations at Glamour magazine's Women of The Year awards in November, Lyons was contacted by Suzanne Emmerich, founder and executive director of the Incontinentia Pigmenti International Foundation who hopes that Lyons will become a spokesperson to raise awareness of the disorder.

Lyons has spoken about her lack of confidence resulting from the disorder before. When talking to The New York Times she commented: "I am so not an insider, and that is O.K. I might feel like one in very particular moments. But I don't feel the same pressure I did when I was young to be part of the club. I'm not one of the cool kids, and that is totally fine."

Lyons, who is a fashion icon known for her personal sense of style as well as her successful career, will no doubt be a source of comfort and inspiration to many young women who suffer from the disorder (the majority of boys with the disorder die in utero). The prevalence is unknown, but since Emmerich has begun her website, many people from around the world have contacted her, some unaware that they were suffering from the disorder until they found her website.

In terms of hair loss, the disorder can cause patchy loss on the scalp. About 50% of women with IP have minor abnormalities with their hair, according to the Incontinentia Pigmenti International Foundation. The website goes on to explain:  "The alopecia is probably caused by scarring from the rash, but this is not proven." Some women with IP may also experience coarse, wiry and lusterless hair.

The Belgravia Centre is happy to offer free consultations to any women with alopecia who wants advice on whether or not a tailored hair loss treatment plan could stop the shedding and help hair to regrow. Not much is known about the treatment of IP symptoms, and it is impossible to medically treat scarring alopecia to regrow hair,  but we have treated many women with various types of hair loss successfully with minoxidil. We hope that more will be known about this disorder and the treatment of its symptoms soon.