Is Lindsay Lohan Losing Her Hair? 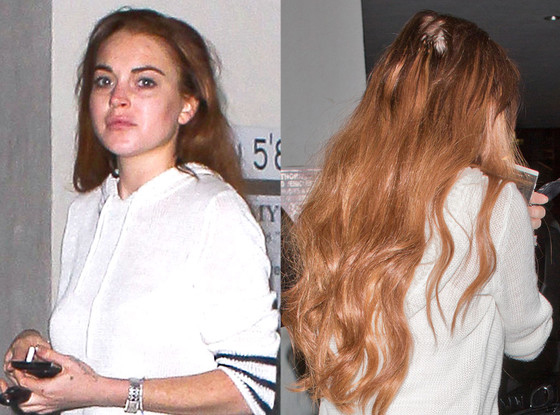 Former Disney star Lindsay Lohan was photographed sporting a significant bald patch on the back of her head as she left a party this week. The Mean Girls star is known for her various hair styles, often switching between blonde and red hair and having thick, heavy extensions attached. Could her frequently changing looks be the cause behind her hair loss?

Are hair extensions to blame again?

Lohan has clearly been a fan of extensions for many years, using them to dramatically change her hair colour and fullness on a fairly regular basis. However, the photographs taken outside the E. Baldi restaurant in Beverly Hills clearly demonstrate a lack of proper care and attention towards their maintenance.

Lohan is the latest in a long line of stars to experience Traction Alopecia caused by the permanent wearing of hair extensions, sharing the condition with Katie Price, Rihanna and Jessica Wright among others. This kind of hair loss is caused by extensions placing additional tension on the hair follicles and roots, causing hair breakage and loss.

Could there be other causes?

Although extensions seem the most likely reason for the sudden appearance of bald patches, Lohan’s lifestyle could also provide a plausible alternative explanation. Lohan is a known smoker (confirmed by other photos taken this week), and her nicotine habit could have some influence on her hair loss.

Some experts believe that because carbon monoxide and nicotine, two of the ingredients in tobacco, cause circulation problems, it is possible that nutrients vital to hair growth are not delivered to the scalp - causing hair to fall out. The evidence for this correlation is somewhat tenuous, but could be a factor for some individuals.

Lohan has also confessed that she has an addiction to alcohol and drugs, which may also have implications for her hair. Just like smoking, alcohol abuse is known to deplete the bloodstream of vitamins and minerals that are critical to healthy hair growth. Alcohol abusers often have weak, brittle hair which is prone to thinning and breakage.

Likewise, recreational drugs can trigger the same nutrient deficiencies, as users tend to eat improperly. Hair loss caused by these dietary shortfalls is generally diagnosed as being Diffuse Thinning. The good news for people struggling with Diffuse Thinning hair loss is that once dietary balance is restored and their drug using habits kicked, their hair tends to grow back of its own accord.

There are any number of potential causes for Lohan’s sudden hair loss, but what is clear is that she needs a proper diagnosis of the condition to resolve the issue - preferably sooner rather than later.

For any women concerned about patchy hair loss, we suggest contacting us online or calling us free today on 0800 077 6666 to arrange a consultation to put your mind at rest. If you want The Belgravia Centre’s help but can’t make it into the clinic, we recommend filling in our online diagnostic form, for a home use treatment programme that we can send to you no matter where you are in the world.


Eyelash Serum to be Tested on Genetic Hair Loss Sufferers