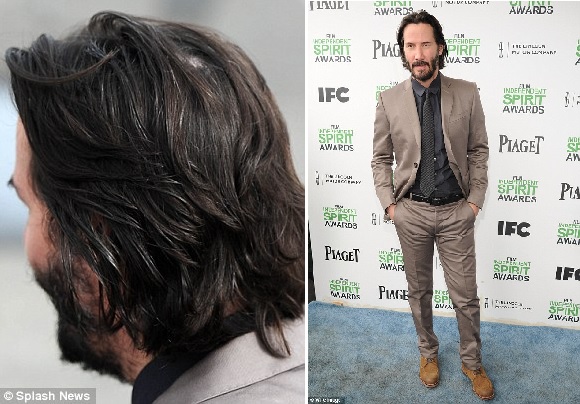 At the age of 49, Keanu Reeves is already something of a Hollywood veteran. The raven-haired Hawaiian has been working in the movie industry for over thirty years now, playing everything from stoner time-travelling students to undercover FBI agents.

Photographed at the Film Independent Spirit Awards recently, Reeves has started showing signs of grey in his hair and beard. Closer inspection also reveals a gently receding hairline and the very early signs of a bald patch on the crown of his head.

With around half of all men experiencing some form of hair loss by the same age, it is little surprise to see Keanu’s hair changing in this way.

is the most common hair loss condition in the world, affecting men and women across everywhere. The condition, also known as Androgenic Alopecia, is caused by a genetic predisposition, meaning that of age, social class and economic standing have no effect in promoting or inhibiting hair loss.

For those affected by baldness, the hormone testosterone is converted into a secondary compound known as DHT. This is an androgen that binds to hair follicles in the scalp, causing them to shrink. As the shrinkage develops, hair regrowth is severely inhibited, until finally no new growth can take place.

Initially, hair loss caused by pattern baldness can slip under the radar, but after hundreds of follicles shrink, the development of a receding hairline or crown vertex hair loss are much more conspicuous.

It is often possible to slow, or even reverse hair loss caused by genetic baldness. Man of the moment Bradley Cooper has apparently sought early intervention for a case of Male Pattern Baldness, showing the importance of getting professional advice as soon as possible.

Because his own hair loss appears to be in the relatively early stages, Keanu Reeves also has a good chance of successfully recovering some of his lost hair were he to begin a custom hair loss treatment plan in the near future.