The Budget wasn't the only big news dominating social media on Wednesday. As the first day of The Ashes got under way, cricketer-turned-pundit Ricky Ponting caused a stir with his dyed hair, sending Twitter's sports fans into meltdown.

As he offered opinions to Sky Sports, the former captain of the Australian national side faced a barrage of tweets commenting on his unnaturally black 'Lego hair', asking if it was an attempt to hide hair loss.

Caught out by thinning 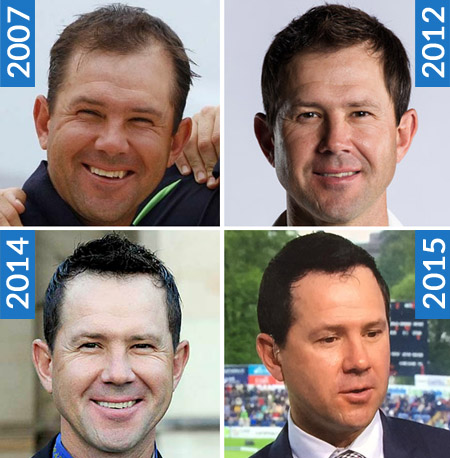 As a player, Ponting was rarely spotted without a cap. A good way to keep the sun out of his eyes, caps would also help to shade his head, as photos from around 2007 appear to show him with thinning hair which would offer less sun protection for his scalp.

The Aussie seemed to go on the defence against his hair loss after this and in 2012 - a year after quitting international test cricket - he was pictured with significantly fuller looking hair. The following year many websites reported that the cricketer had followed fellow pros Shane Warne and Jacques Kallis, and had a hair transplant. Although this was never confirmed by the man himself, Freddie Flintoff has mentioned it in interviews.

By 2014 - once he retired from the game completely - Ponting's hair appeared shorter, healthy but slightly thinner and a lot darker - a jet black compared to his previously natural brown. However, last year's look was still somewhat natural, something today's do seems to have missed, with Twitter-users comparing it to 'creosote', 'a hair weave', 'shoe polish' and 'Lego man hair'. 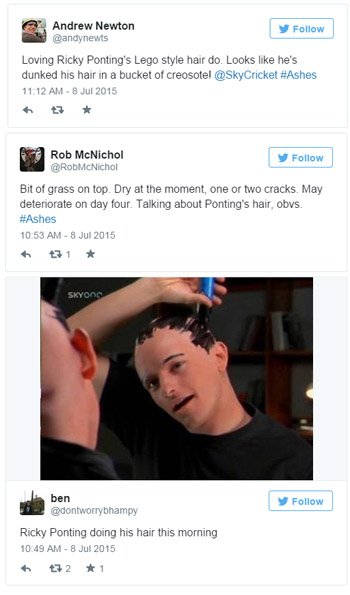 There is no question that Ponting's hair has been dyed, but could this hairstyle - which shows no hint of scalp at all, as can be seen here - be a result of using a hair loss concealer?

Microscopic fibres and coloured sprays can help to make the hair appear thicker. However, particularly in the case of coloured sprays - which some actors use to 'paint' sparser areas, like thinning crowns, and their scalp the same colour as their hair to help conceal their hair loss - often only work on screen, not in person. Another trick involves applying hair-coloured eyeshadow to the parting but, again, this rarely works in real life.

Bigen powdered hair dye is a long-held barbershop secret, used by black men to hide signs of hair loss. Whilst it can work when applied well - generally by a barber - it is all too easy to get it wrong and end up with what is known as a 'Bigen Blackout'. This is where the Bigen paste leaves hair looking like it has been drawn on with a marker pen.

Although this is traditionally used more by black men and those with afro hair due to the dye blending well with their colouring, it could be the case that Ricky has tried this. Using such a highly-pigmented black dye could explain the distinct contrast between his hair and his pale white skin.

Don't get stumped by hair loss

If, as rumour has it, Ricky Ponting did have a hair transplant but is still experiencing shedding, this could be due to him not following an aftercare programme.

Top surgeons recommend anyone wanting to undergo either FUT or FUE restoration procedures first follow a hair loss treatment course for at least six months prior to their operation. Using clinically-proven treatments such as minoxidil to stabilise shedding and hair growth boosters to improve the hair's condition, help to ensure the hair is in the best possible state for the surgeon to work with. This may explain Ponting's regrowth in 2012.

After a hair transplant it is important to continue to follow a male hair loss treatment course in order to maintain the hair around the transplanted area. If this is avoided, the top of the head will continue to be attacked by DHT - the cause of Male Pattern Baldness - and the original hair will deteriorate as thinning progresses. This can lead to the transplanted hair being left isolated, like an island, surrounded by thinning hair so to give post-transplant hair the best possible innings, it is best to speak to a hair loss specialist about maintenance.