Actress Katie Holmes was recently pictured with dandruff when stepping out at an event in New York, where the weather has been particularly cold recently. But could the weather be causing her white flakes?

Dandruff is a scalp condition (also called Pityriasis) in which the outer layers of the skin shed, resulting in the type of small white flakes that can be seen in Katie’s hair, pictured below.

Normally the skin cells on the scalp flake off over 28 days, but in people who have dandruff, cell renewal is much quicker, taking place as often as every two days. This leads to a build-up of dead skin cells on the scalp, which in turn causes bacteria and fungi to form, resulting in even more skin flaking away from the scalp.

Normal dandruff is a common condition affecting half the population at some point in their lives but severe dandruff is more unusual and can require specialist treatment.  Story continues after image. 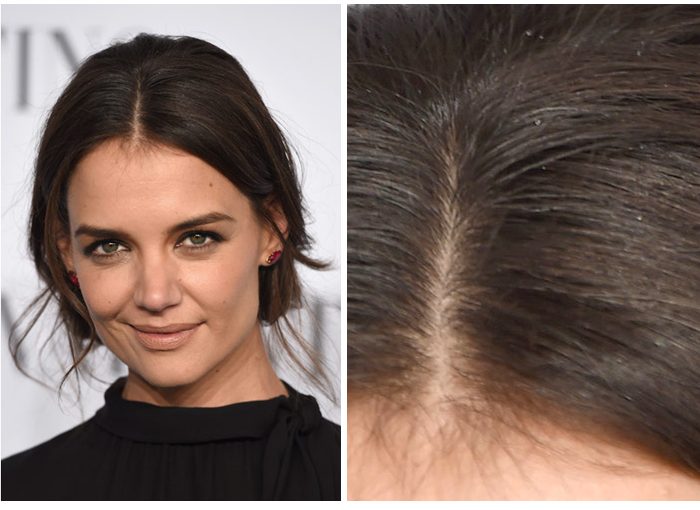 Could cold weather play a part?

There are a number of reasons for dandruff to occur, including skin conditions such as psoriasis and eczema, allergic reactions to products or just poor cleaning habits. Not washing hair frequently enough will lead to a build-up of skin cells, and the appearance of dandruff.

Cold, winter weather - as well as central heating - can dry out the skin on the scalp, causing it to become tight, itchy and flaky, but although dandruff is often considered to be caused by a dry scalp, the condition is actually more complex than this. Without examining Katie’s scalp, it’s difficult to tell exactly what’s causing her case of dandruff.

Whatever the underlying cause of dandruff, having a dry scalp will exacerbate the condition, so protecting and moisturizing the scalp during cold weather can help sufferers reduce the amount of dandruff. Washing your hair more often using gentle products or moisturising treatments that will not cause further drying, wearing a hat and moisturising your scalp so it’s not dry and itchy, can all be beneficial.

Can dandruff cause hair loss?

Most cases of normal dandruff are mild and will not cause hair loss. These cases can usually be self-managed using medicated dandruff shampoo such as Belgravia's B4 shampoo, which has a more concentrated formulation than over-the-counter versions.

More severe cases of persistent dandruff may require specialist treatment as they may be an indication of a scalp condition such as Seborrhoeic Dermatitis, also known as Seborrheic Eczema, which may cause hair loss. People with dandruff should seek expert advice if they are also experiencing an inflamed scalp and scaly skin, which can be an indication of the condition.

Can My Persistent Dandruff Lead To Hair Loss?

Can My Persistent Dandruff Lead To Hair Loss?

Protecting Your Hair in the Cold Weather

Protecting Your Hair in the Cold Weather