Whilst many pharmaceutical companies are trying to develop the first truly effective treatments for the most severe forms of autoimmune hair loss, these tend to be either topical or oral.

Now, California-based Bioniz Therapeutics has announced it will be testing a new hair loss solution for moderate to severe Alopecia Areata, which will be delivered intravenously via a drip. 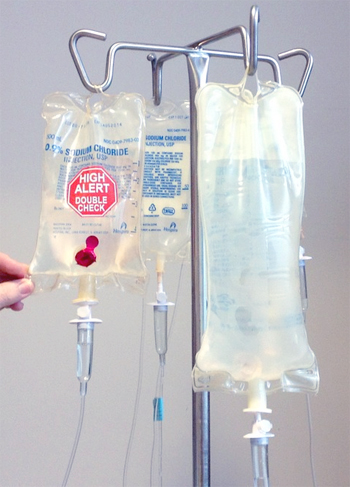 
Details about the forthcoming double-blind, placebo-controlled study were provided as part of its Phase 2 clinical trial registration. It involves the testing of a drug known only as BNZ-1 which will be administered to trial participants in centres across the USA using a slow IV push weekly for 3 months.

Whilst little is given away in this information, what is clear is that the drug being tested - a PEGylated peptide inhibitor of IL-2, IL-9, and IL-15 - will be trialled in a variety of doses and appears to target a number of interlukeins previously identified as being involved in autoimmune functions.

All forms of Alopecia Areata are understood to be autoimmune diseases which cause hair loss to various hair-bearing areas of the head and body to a lesser or greater extent with Alopecia Areata being the mildest form (scalp only), Alopecia Totalis affecting the entire head and Alopecia Universalis causing those affected to become entirely hairless.

Though the trial is not yet recruiting, volunteers will be 18 years old and over with a minimum of 50 per cent hair loss from their scalps. This can be from extensive scalp-only Alopecia Areata, Alopecia Totalis or Alopecia Universalis. The presence of any of these autoimmune hair loss conditions must have been professionally diagnosed and have remained at the same level of shedding for more than six months but less than 10 years.

Those with any other autoimmune disorder, inflammatory scalp conditions or those who have been using topical Alopecia Areata treatment recently are excluded from taking part in the study.


Interestingly, patients who have previously been treated with any JAK inhibitor treatments for autoimmune alopecia - presumably as part of another clinical trial given these drugs are not yet approved in relation to treating hairloss - are eligible to also take part here.

JAK inhibition has been at the forefront of the race to develop the first clinically-proven treatment to be signed off by medical regulatory bodies, for Alopecia Totalis and Universalis. Whilst scalp-only Alopecia Areata treatment is possible, the most extreme forms of the condition have no reliably safe and effective hair regrowth options. This is why the American Food and Drug Administration, the FDA, has granted fast-track status to the development of one drug in this area - Concert Pharmaceuticals' CTP-543.

This new entrant is further proof that this race is full steam ahead and people affected by autoimmune baldness or patchy hair loss may soon have viably options for dealing with their alopecia, which don't involve simply accepting or covering it.

How Do You Take Part in Clinical Hair Loss Treatment Trials?'

How Do You Take Part in Clinical Hair Loss Treatment Trials?'