There are certain ‘looks’ in movies that are hard to convincingly fake especially when you don’t have blockbuster-style budgets to pay for top stylists and make-up experts. So when up-and-coming Indiana actress Georgia Simmons signed up to play the lead role in a new independent film about a teenager with Alopecia Areata, she knew that a visit to the hairdresser was on the cards. 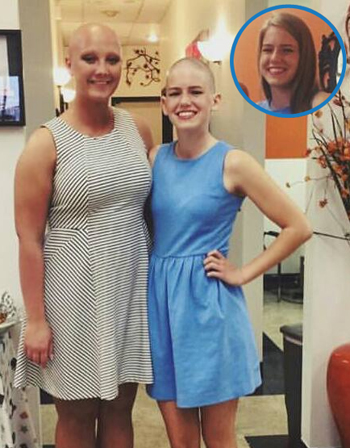 The new hair loss film is called Wig’d Out, and it was written by 18-year-old Olivia Rusk, who has Alopecia Areata, with co-writing coming from her mother. It is loosely inspired by Olivia’s own life story, and how she fought to find her way in a world so obsessed with body image and beauty.

Involved in the movie

Olivia and her mum are very much involved in the production of the movie, and it was little surprise to see Olivia right there by Georgia’s side offering encouragement when the actress sat down in the hair salon to undergo her transformation.

Georgia told Indiana newspaper The Indy Star: “For High School girls that care about how they look and how many likes they got on Instagram, shaving my head will bring a message.” She added that “it’s not just what you look like,” but how you are that is important.

The teenager told the newspaper that having her hair shaved off for the film was not something she entered into lightly, and that she had a discussion with her mother about the effects of doing so. In the end she decided it was something that was well worth going through with. “I think that shaving my head for such a temporary thing is going to be an amazing experience,” she told the Indy Star, adding that for Olivia this had been something she had been through her whole life.

18 months old when hair fell out

Olivia was just 18 months old when her baby blonde hair started falling out. It began with small circular patches that appeared very quickly, and within days there were multiple bald spots on her head.

Her mother, Sandy, rushed her to the doctor's and was told that Olivia had Alopecia Areata, an autoimmune condition that affects up to five million Americans. It has recently been revealed as the second most common cause of hair loss in the world, behind androgenetic alopecia (male and female pattern hair loss).

On her blog, Olivia’s Cause, the teenager writes that a series of consultations with doctors and specialists ensued, and that some regrowth was seen thanks to a combination of topical steroids and minoxidil. In the UK minoxidil has a minimum age restriction of 16 although there are some alopecia areata treatment options available to younger patients.

By the age of four, most of Olivia's hair had grown back, but the hair loss returned a few years later at which time the decision was made not to resume treatment for fear of possible long-term side effects. After experimenting with wigs, she decided when she was eight that she would embrace the bald look a decision which she says helped give her confidence from a young age.

Since then, she has gone on to be a talk-show host for Radio Disney and performed as a motivational speaker. Additionally, she has written a book, a song and recorded the music video featured here, plus, of course, she has penned Wig’d Out with her mum. The movie, which is currently in production, stars actors from US shows Family Ties and Kim of Queens, and tackles issues including bullying, diversity and self-acceptance.

Kate Chaplin, the director of the film who also had a hand in the script said she much admired Olivia’s courage. “We’re all beautiful, and we’re all imperfect, and we’re all just struggling,” she told the Indy Star. “The people I love most in my life don’t wear make-up, don’t care what they look like, but they’re true to themselves.”