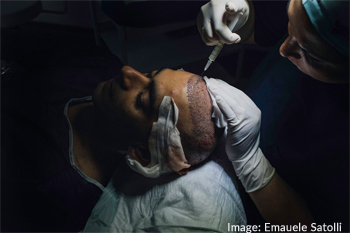 procedures are not pretty, but they’re certainly common in Istanbul, which is why a local photographer became so fascinated by them.

Interviewed by Wired magazine, Italian photographer Emanuele Satolli who lives in Istanbul explains how it has recently become commonplace to see men with bandaged heads wandering around the city. When a friend told him that they were men with hair loss who were in town for cheap hair transplants, he wanted to delve deeper and approached several of the city’s reported 350 clinics which offer the operation.

Several allowed him in, and the result is a series of photographs (don't look if you're feeling squeamish) that show the decidedly unglamorous reality of having a hair transplant. 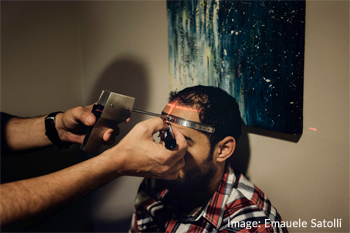 It is not that the facilities appear lacking; what the pictures do is paint a very graphic picture of the operation a modern procedure known as Follicular Unit Extraction and all that signing up for it entails. This includes nurses drawing on the head, lying still for up to 10 hours, and being injected multiple times on the scalp.

Turkey has become a Mecca for hair transplants over the past few years because a procedure can be booked at a fraction of the price it would cost in many other countries. With reported fees in high-end western clinics of up to £30,000 though a price tag of around £5,000 to £13,000 is perhaps more common Turkey has found a niche offering transplants at around £1,300.

For many men experiencing Male Pattern Baldness, the saving is overwhelming. While booking the operation with a top UK surgeon with a proven track record would likely be a lesson in world-class surgery and aftercare, it would doubtless be expensive. Many men seem to think that a rather more cheap and cheerful Turkish option is worth a punt. Although this does not always turn out to be the case, as a 30 year old from Manchester recently discovered. 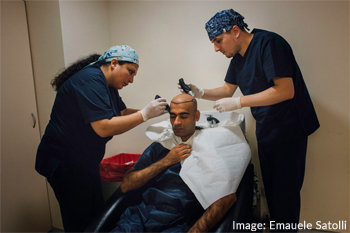 The Wired article explains how vast numbers of patients to the Istanbul hair transplant clinics are Asian hair loss is famously rife in Dubai and the Gulf though British men are no strangers to the lure of a cheap transplant, too. Website WhatClinic reported that the number of inquiries from the UK about Turkish hair transplant clinics had more than doubled in 12 months.

Having surgery of any kind, anywhere in the world can be risky but it is important to understand the specific added risks of having hair transplants abroad. Different countries have different guidelines in terms of both healthcare and regulation, so the level of care may not be as stringent as UK patients are accustomed to or would expect. Other difficulties arise in instances where there is a language barrier, emergency care or even simple in-person aftercare required. If you are in another country, this is not always straightforward.

"This has led to us witnessing some horrific results of botched surgery, including poor hair growth, density and direction, wide strip scars, donor site depletion from graft over-harvesting and in the worst cases, skin loss from necrosis," says Dr. Greg Williams, President of the BAHRS and a surgeon at Belgravia's hair transplant partner, the Farjo Hair Institute, tells the Mirror.

What the photographs irrefutably show is just how medically involved a surgical hair restoration procedure is. When equally impressive results can sometimes just as easily (and inexpensively and painlessly) be achieved with a bespoke hair loss treatment course, it is a reminder why so many hair transplant doctors first recommend trying this for six months before surgery.