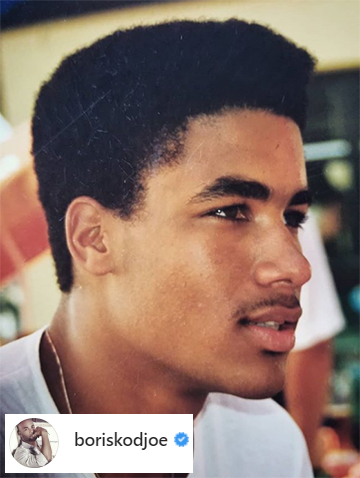 A throwback photo of Boris Kodjoe with hair

This controversial move is meant to encourage men who are losing their hair to own their baldness, as Kodjoe has done, and let them know that it's ok to 'let it go'.

The 45 year old, whose smooth, shaved head has become his signature look, revealed a photo of him with hair earlier on in his career. With it, he admitted how he finally went bald after becoming a father and detailed the various steps he tried to conceal his hair loss, before embracing his "#BaldNsexy".

"My hairline receded faster than I could colour it in"

In an Instagram post dated 28th November 2018, Boris Kodjoe left the following caption on the photo of him with hair:

"Yep… go ahead, you can say it. Scream if you want to…. I had HAIR!!!! Granted it was a long time ago and it left me for good right around the time I became a father. But I fought for it, pretended it was still there even though my hairline receded faster than I could color it in with #mascara or other USELESS anti-balding remedies. #Sharpie #OnlyForMen #HairFibers #FillInPowder #Serum yes, I did it all!! And was convinced no one would notice…BUT THEY ALL KNOW YOU’RE DOING IT….EVERYONE KNOWS!!!!
And in the end… I cried… and learned to say goodbye. And eventually I embraced my #BaldNsexy.

Tag SOMEBODY YOU LOVE and who needs to LET IT GO!!!! #HairDontCare #LEDDIGOOOOO"

He gained just under 83,000 Likes for the post, with over 2,300 comments from people. These ranged from compliments on his appearance, to other men appreciating the sentiment and agreeing that they used to be the butt of jokes when they used certain concealer products which did little to hide a receding hairline. 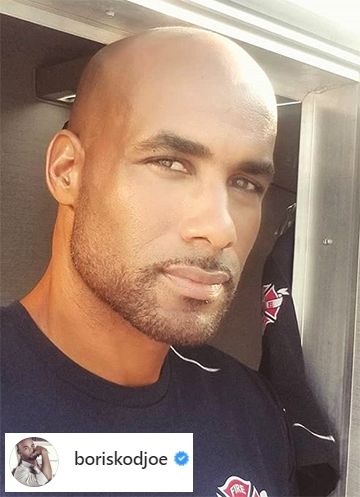 Boris Kodjoe pictured in 2018 on the set of Station 19

There were many men tagged in the comments too - with a few jokers @-ing basketball legend LeBron James whose on-going battle with Male Pattern Baldness has been well documented.

When a shaved head isn't an option

While it's certainly true that some men, including Kodjoe, Dwayne 'The Rock' Johnson and Gianluca Vialli, seem to suit being bald possibly more than they suited having hair, this is not the case for everyone.

Hair can be a point of pride, making it hard to 'say goodbye' to for some, others may feel the bald look does not suit their personality or career, though it may also be a case of feeling unhappy about baldness drawing attention to a physical attribute they are uncomfortable about, such as large ears or the shape of their head. Sir Elton John, who has famously tried every trick in the book when it comes to hair restoration and concealment, said he felt he looked "like Shrek" with no hair due to his head shape.

Whatever the reason, if a man is noticing signs of hair loss and wants to try to stop further shedding and regrow what he had, there are clinically-proven non-surgical options available. The one-a-day oral tablet finasteride 1mg is designed to block DHT, the hormone to which those with genetic hairloss are susceptible and which causes thinning hair and receding, whilst topical applications of high strength minoxidil help to encourage accelerated hair growth.

Either or both of these two MHRA licensed and FDA approved Male Pattern Hair Loss Treatments can be employed once medical suitability has been determined. A consultation with a hair specialist will provide both a diagnosis and personalised treatment recommendations, meaning for those who aren't as keen as Kodjoe to embrace their 'bald n sexy', there are viable alternatives worth exploring.