Thousands were given a ray of hope this week with the news that America's Food and Drug Administration (FDA) had cleared a scalp-cooling device named the DigniCap for use on breast cancer patients. The device chills the scalp during chemotherapy so hair loss associated with the treatment can be minimised.

Hair loss is a common side-effect of chemotherapy treatment and many women with breast cancer agree that it significantly adds to the overall distress that comes with a diagnosis. Cold caps have now been in use for many years, but in some countries at a limited level. Having obtained its US patent in October 2015, this subsequent FDA clearing of the DigniCap for breast cancer patients is a first in the US and paves the way for much wider use. 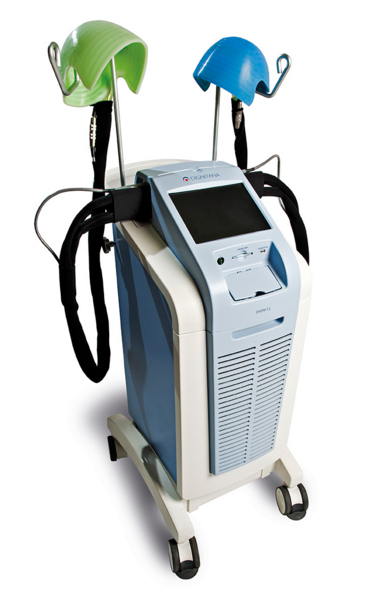 
The Tech Times, reporting on the FDA’s decision, explains that the DigniCap Cooling System, manufactured by Swiss company Dignitana Inc, was tested at the University of California on 122 patients at four different medical centres. All participants had been diagnosed with breast cancer and were about to begin chemotherapy.

The treatment involves putting the cap on half an hour before the drugs are taken and it remains in place for around 90 minutes, by which time the effects of the drug in the blood start to diminish.

The science behind the device is relatively simple: the chilled scalp slows down the flow of blood (containing the chemotherapy drugs) to the hair follicles and in doing so it gives them a better chance of not being harmed.

In the Californian study, over two-thirds of patients maintained more than 50 per cent of their hair.

"We are pleased to see a product for breast cancer patients that can minimise chemotherapy-induced hair loss and contribute to the quality of life of these individuals," said Dr. William Maisel, Office of Device Evaluation's acting director at the Centre for Devices and Radiological Health of the FDA. “Managing the side effects of chemotherapy is a critical component to overall health and recovery.”


DigniCap has previously been named the device of choice at CircleBath hospital in Somerset, whose staff tried the cap before offering it to patients. They said at the time that it was “eminently more comfortable and user-friendly” compared to others that they trialed.

Another popular maker of these cold caps is British firm Paxman, whose machines have been used on cancer patients since the late 1990s. Paxman is the original developer of the technology - derived from a beer cooler - and is one of the most widely-used brands in UK hospitals.

This week they will be presenting the results of the US clinical trials of the company's new Orbis hair loss prevention system for early stage breast cancer patients at the San Antonio Breast Cancer Symposium. Paxman, too, is seeking FDA approval for its products and has been working with the medical body towards achieving this.