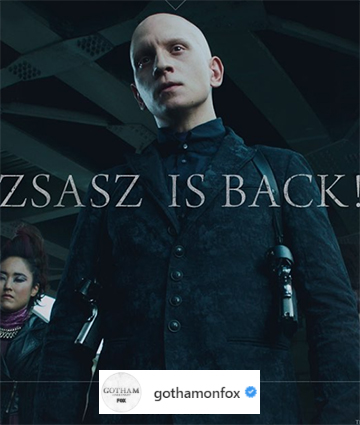 When it comes to Hollywood star, actor Anthony Carrigan, however, the message is far removed from this 'advertorial' trend.

Throughout his ascending career the bald star has consistently spread messages of empowerment and acceptance to people with the autoimmune disorder Alopecia Areata. And he doesn't show any signs of stopping...


Despite his standout roles involving playing bad guys in top-rated TV dramas - from Victor Zsasz in Gotham to NoHo Hank in Barry - Carrigan is known off-screen for his big heart. He regularly talks about how he first developed Alopecia Areata when he was three years old, and has discussed shaving his head when the patchy hair loss became more pervasive, and eventually accepting his baldness when the condition progressed to the most extreme phenotype, Alopecia Universalis, which affected his entire body.

In addition to sharing his personal experiences via his online platforms, the recently-married star is also open to discussing them in interviews, and has even filmed alopecia acceptance videos to help others in a similar situation. In 2015 he released a short film with fellow alopecian actor, Jannica Olin, called '#BeYou' where the two talk about losing their body and scalp hair at different times.

Furthermore, the 35 year old Bostonian is an active supporter of the Children's Alopecia Project (CAP) - an American organisation similar to Alopecia UK but which provides support to children who are affected, and their families, rather than adults. In addition to this, the charity aims to raise awareness and promote self-esteem among those affected - something Carrigan appears passionate about.

Work with US children's alopecia charity


For International Alopecia Day in 2017 he shared an uplifting message about how he felt at various stages of his journey from the scalp-only form of Alopecia Areata to full head and body Alopecia Universalis via his social media channels. "When people talk about transformation, most of the time the focus is on the end result, the final stage bringing liberation. But looking back on my own process of acccepting my alopecia, I can see the importance of each stage. I've had AA since I was 3, so there is a whole story before these photos. But here are three great moments for me.  Continues below...

The first on the left was the time I was willing to not put make up on my eyebrows. You can tell I was unhappy but the confidence to be seen without eyebrows was huge for me!

The middle one was the big head shave. Something that terrified and excited me. I was lucky to be surrounded by such wonderful friends who backed me 100% and made the process super fun. 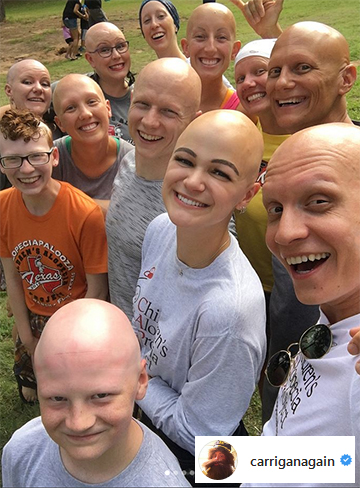 And now today, feeling so good, at peace and even grateful for my alopecia. I wouldn't change anything about the process I went through because it got me to this point. And I've connected with so many beautiful Unicorns because of it. Whatever stage you're at I'm sending you the biggest love I have in my heart."

Anthony Carrigan is often photographed taking part in CAP events, and refers to himself - and others with any of the various phenotypes of alopecia - as 'unicorns' due to them being unique. In an Instagram post dated 21st May 2018, the actor wrote:

"Imagine if the thing that you hated most about yourself ended up being the thing you love the most. Seems kind of impossible, right? Well, it is totally possible and I'm here to tell you that. It takes work and acceptance and love, but you can do it. I'm on the other side now having embraced my alopecia and it feels amaaaaazing. This  is from the #cap5k raising money to help send so many kids with alopecia to camp to learn, grow, and embrace what makes them unique. Like a Unicorn (get it?) Anyway, sending all of you love to the parts that don't feel it."

Being so candid about what is often an issue even adults struggle to deal with, is something many people appreciate. Knowing they are not alone and others have not only embraced their 'difference' but - in some cases - now consider it an advantage, can be inspiring.

Currently, although limited options for Alopecia Totalis and Universalis treatment exist, generally Alopecia Areata treatment is more promising for the scalp-only form of the disorder, which disrupts the hair growth cycle and can cause temporary or on-going hair loss. Therefore, the more voices raised in discussing the issue, and the more role models - including Carrigan's Gotham co-star, Jada Pinkett-Smith, friend and live action Dumbo actor Joseph Gatt, and British Olympic gold winning cyclist, Joanna Rowsell-Shand - that can be established to help, particularly children, to understand that their hair is not their identity and their condition does not define them, the better.