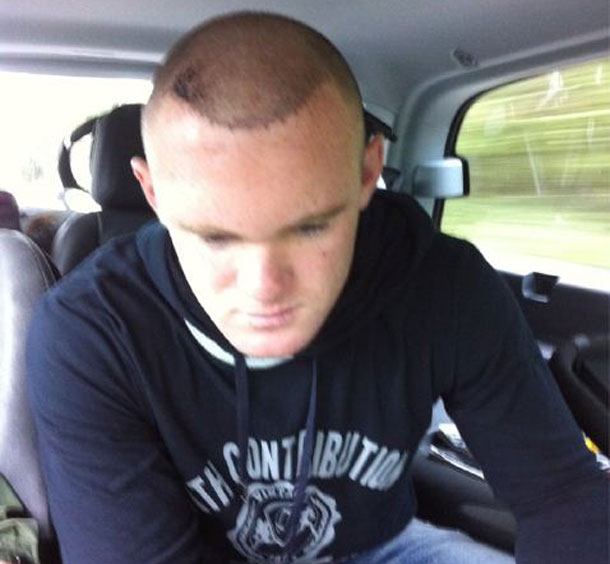 Rooney's first photo following his hair transplant. Click on the photo for a larger version


Twitter has been going wild with this morning's tweets from Wayne Rooney following his hair transplant. At around 10am he reported, "Just to confirm to all my followers I have had a hair transplant. I was going bald at 25 why not. I'm delighted with the result".

Fans are now looking forward to see the results Rooney's the surgery. Rooney also informed his followers, "It's still a bit bruised and swollen when it dies down u will be first to see it. Anyone recommend any good hair gel. Haha".

Rooney's hair loss is caused by genetics, a condition called Male Pattern Baldness which is the most common cause of hair loss in men. The condition only affects hair at the top of the scalp, which means hair around the back and sides are not genetically predisposed to shed.

The surgical procedure that Rooney underwent is known as FUE (Follicular Unit Extraction) and entails extracting hairs from the back to the top of the scalp. As the hair around the back and sides of the head are not affected by genetic hair loss, they grow normally when transferred to the areas affected by baldness. The procedure can look very natural and we are sure the first photos released of Rooney post-surgery will show how successful his transplant was. It might be weeks or months before the hair begins to grow through normally.

Could Rooney Have Avoided Surgery?


If Rooney had begun to use the correct combination of medically proven treatments in his early twenties, he would have almost certainly maintained his hair until this day, resulting in no need for invasive surgery. As hair transplants can cost anything from £5,000 to more than £30,000, this would have saved him a lot of money, as well as the trouble of invasive surgery and a long healing period. Aside from this, there is also the possibility of the need for multiple sessions of surgery. Rooney's transplant is reported to have costed £32,000. As a person on a wage of more than £200,000 per week this may not have been such a worry, but for most men with hair loss that isn't the case.


Rooney will now need to maintain the hair that is still susceptible to hair loss, with the regrowth treatments mentioned above. This will ensure that his hair around the transplanted follicles will still remain in tact and not form patches of baldness as Rooney's natural thinning continues on the top of his head.


We advise anybody experiencing hair loss to stop it as early as possible. The best time is a soon as shedding becomes noticeable. This might be when you notice an increased amount on your pillow in the morning, or in your hands after applying gel or wax to your hair. Treatments can however be extremely successful at any stage of thinning whether it be mild or relatively severe. The correct combination of treatments will almost always stop hair loss and will in many cases also regrow hair. You can see the kind of regrowth results that many men see by viewing these hair growth treatment success stories. Here you will hundreds of before / during treatment photos, as well as reports from people that have been using a treatment course for hair loss, updated on a weekly basis.

For more information on preventing hair loss and regrowing hair contact The Belgravia Centre or complete an online diagnostic form for home-use treatments anywhere in the world.