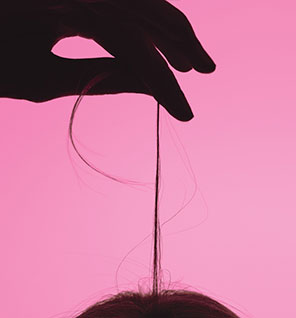 is a condition which causes self-induced hair loss, as sufferers develop a compulsion, often sub-consciously, to tug and pull at their own hair. The condition is one of the most common causes of hair loss in children, with the most affected group being young people around the ages of nine to 13. It can also affect adults of both genders, although women tend to be statistically more likely to suffer from Trichotillomania.

More often than not, the condition is focused on the scalp, creating irregularly shaped, diffuse bald patches. It can affect other parts of the body, with some sufferers finding themselves compelled to pluck at eyebrows, eyelashes and other body hair.

A diagnosis of Trichtillomania can be difficult to obtain, as it is often a sub-conscious habit, with sufferers not knowing why they are losing their hair. In certain cases, those suffering from the condition also eat their hair; this is known as Trichophagia and can cause physical complications. The stomach becomes irritated by swallowed hair, as it is unable to digest it, and in extreme cases can cause problems with digestion, or even stomach ulcers.

How can Trichotillomania be treated?

The good news is that, depending on the severity of the case, it is possible to recover hair lost to Trichotillomania in all but the most extreme cases. Extreme Trichotillomania, which has taken place over a prolonged period or been particularly violent, can cause hair follicles to stop growing entirely, resulting in a permanent bald patch. However, this occurs in the minority of cases.

Trichtillomania can be treated with medication, although this will only take effect when the hair follicles are still functional. The Belgravia Clinic also uses non-surgical hair replacement as a treatment for Trichtillomania. This system integrates with the remaining hair and has dual benefits not only does it hide the physical symptoms of Trichtillomania, it can also help natural hair to recover.

Non-surgical hair replacement covers the damaged area, preventing the sufferer from further pulling at the hair. This not only helps natural hair to re-grow, but can also help break the habit of Trichtillomania. This method has a good success rate and it, along with the Belgravia Clinic, was featured in a BBC 4 documentary on the condition.

Unlike almost every other hair loss condition, Trichotillomania is classed as a psychological disorder. Consequently, treatment courses for adults often include therapy which aims to address the underlying compulsion. It’s not fully understood what triggers the condition, but anxiety, depression and post-traumatic stress disorder have all been linked to Trichotillomania.

Trichotillomania in children is usually self-limiting and will be grown out of naturally as the child matures and reaches puberty.

What should I do if I am concerned about someone with Trichotillomania?

As with most conditions that have a psychological root, admission of the situation is the first major step toward dealing with it. If you, or someone you know is concerned about Trichotillomania, then contact the Belgravia Clinic, for a consultation and personal treatment plan to address your hair loss condition.