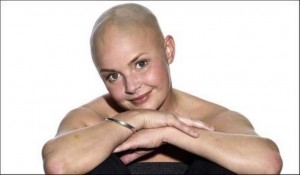 A lot of women who suffer from hair loss will contend with their condition rather than seek help but Gail Porter, who once described herself as “bald but not afraid”, has continued to raise awareness about alopecia areata which has rendered her completely bald but not stripped her of her confidence.

Hair loss in women is still very much a mysterious condition and despite upwards of 40 percent of the female population being affected, many suffer in silence. Women will rarely experience baldness, instead hair loss tends to be limited to overall thinning but the psychological effects are no less devastating.

For Gail Porter however, the chirpy British TV presenter went completely bald in a matter of four weeks. In 2005, at the age of 34, Gail had to face up to the probability that she would never have hair again.

Female hair loss can be treated effectively in most cases. FDA-approved hair loss treatments have been proven to generate hair growth but results are vastly improved when administered in the right dose for the individual. Especially when the possible contributing factors are being dealt with and treatment is being complemented with the appropriate hair growth boosters, even alopecia areata sufferers see results.

Alopecia areata is thought to be an autoimmune disorder where the body’s immune system mistakenly turns on itself. The chronic inflammatory disease affects the hair follicles and presents itself in patches of hair loss over the scalp, but it can affect other hair-bearing skin. In some cases, alopecia areata develops into complete baldness (alopecia totalis) and in rare cases people may lose all body hair (alopecia universalis). The progression of hair loss can happen slowly, developing over weeks or months or, as in Gail’s case, it can be sudden and dramatic.

Gail, Britain's second favourite bald celebrity after Little Britain's Matt Lucas, has been hailed for her bravery throughout her ordeal. Refusing to wear a hat or a wig, Gail has maintained a public profile and continued to raise awareness of the condition.

Although it took some time for Gail to come to terms with what was happening, a friend revealed to the Daily Mail. “At first she went into denial and hid herself at home she didn’t want to go out or see anyone,” the source said. “Initially she cancelled all her appearances… But [she] decided to face her demons and she’s determined not to let this beat her.”

No one is exactly sure about what causes alopecia areata but there is evidence to indicate a genetic predisposition. According to the British Journal of Dermatology, about 20% of people with alopecia areata have a family history of the disease. Stress has also been proven to be a contributory factor and Gail has had no shortage of that in her life.

The bubbly, once blonde, presenter suffers from bipolar disorder, has been anorexic and when pregnant with her now seven year-old daughter Honey, was border-line obsessive compulsive. She later suffered post-natal depression and discovered she had a thyroid condition. Gail thought her hair loss was a “wind-up”.

“The funny thing was I was in a really good place. I was in America, working, I was with my then-boyfriend James, and I was generally happy,” Gail said. “I had a bit of stress because of the messy divorce, but nothing compared to what I had been through. I have no idea why it happened then. It just did.”

In 2007, Gail published her autobiography Laid Bare: My Story of Love, Fame and Survival, in which she discusses her very public experience of alopecia areata.

“It’s very personal but it has helped me see things in perspective and taught me not to stress about the things that don’t matter,” she said. “I also met other people with alopecia, which was very important to me. I think it’s good to talk to people to let them know that they’re not alone.”

Alopecia areata affects about one in 100 people and although it can be initially quite distressing, hair can spontaneously grow again without any treatment. However because of the unpredictable nature of the condition, specifically tailored hair loss treatment programs can help to deal with the only notable symptom.

But you don’t have to live with hair loss and you certainly don’t have to deal with it alone. For more information, contact the Belgravia Centre on 020 7730 6666 or send an email. The UK’s leading hair loss clinic has been treating hair loss including alopecia areata successfully for 15 years. Consultations and diagnosis are free and their expert trichological advice is also available online via the online diagnostic form.

In the meantime, take heed from Gail who says: “It is a big thing not having hair. But I’m still here, I’ve still got my health.”

Alopecia Areata in Women is Real Don’t Suffer in Silence
Female Hair Loss Should Be Treated
Alopecia Areata Cleared up in Most Cases
Treating Alopecia with Hypnosis
How Effective is Minoxidil?