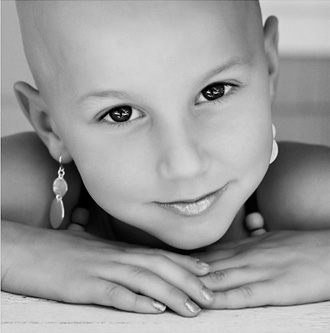 Hair loss is not uncommon among pre-pubescents, and while it can be a scary and upsetting time for the child affected, most conditions do right themselves naturally as the body matures. There are several types of triggers for hair loss in children, some physical, some emotional and some that are affected by external factors.

Just as adult bodies react to stress, so do those of children. Consequently, conditions such as Telogen Effluvium are relatively common among younger people. Telogen Effluvium occurs when a greater number of hairs than usual are shocked into prematurely entering the resting, or telogen, phase.

After a period of 2-3 months, the hair begins to shed as the growing cycle renews itself. This can come as a surprise to both parent and child, since the child will often have recovered from the triggering event long before the resultant hair loss becomes apparent.

As with adults, Telogen Effluvium is triggered by a sudden shock or severe stress on the body. This can result from something as simple as a bout of flu or fever, or an emotional stress, such as problems at school, divorce or a death in the family.

The good news is that Telogen Effluvium generally just interrupts the normal hair growth cycle, rather than stopping it. Once the telogen phase is complete, the hair will naturally grow back, providing the underlying cause of stress or shock has been resolved.

Trichotillomania is a condition which results in self-induced hair loss. It is usually triggered by stress or an underlying psychological or emotional issue. Physically it presents itself as an obsession with hair in which the child unconsciously pulls out their own hair, resulting in breakage and irregular bald patches. Many children naturally grow out of the condition, especially once the cause of distress has been removed. Hair will usually re-grow, assuming that there has been no permanent damage done to the follicles. Concerned parents should seek medical advice from a professional if the condition appears particularly aggressive or drawn-out.

There are two conditions which can cause childhood hair loss which can both be attributed to a physical cause. The most common cause of hair loss in youth is Tinea Capitis, more colloquially known as scalp ringworm. This nasty little condition is treatable with anti-fungal medicines.

Scalp ringworm is caused by a fungal infection that weakens hair shafts, causing them to break. The initial point of attack is usually the hair follicle, from where the infection spreads along the hair itself, weakening it to breaking point. Symptoms include patchy hair loss across the scalp, occasionally accompanied by scales or grey flakes, similar in appearance to dandruff. Looking closely you will also see tiny black dots of hair on the scalp in affected areas; this is where the hair has broken off close to the scalp. Affected children may also find their scalp becomes unbearably itchy

The condition is contagious in its early stages and can be passed from child-to-child through sharing combs, pillows, towels etc, as well as direct head-to-head contact or contact with infected animals. Parents are advised to contact their GP who will confirm the diagnosis and usually prescribe a course of anti-fungal medicines. Once the infection is gone, hair will begin to re-grow

Loose Anagen Syndrome is a condition, mainly affecting fair-haired girls, in which the hair shaft and follicle are not properly attached. The connective tissue between them is weaker than normal and consequently children can painlessly and sub-consciously tug their hair from their scalp. Although there is no known treatment for the syndrome, it usually corrects itself naturally before the sufferer reaches puberty.

While some advances have been made in protecting hair against the effects of chemotherapy, none of the treatments available are particularly suitable for children. While the cold cap can be effective, it can’t be used for many common forms of childhood cancer, such as leukaemia. It is also an extremely discomforting experience and for this reason is not recommended for children.

There is some tentative evidence that a folic-acid rich diet may have a positive effect in lessening or preventing hair loss during chemotherapy. The Plant Programme was devised by cancer sufferer Professor Jane Plant and she credits it with saving her hair during chemotherapy.

However, over restrictive diets can have other negative effects on growing children, so it is best to speak to your doctor before beginning any specific diet for a child.

In the majority of cases hair lost through chemotherapy does grow back naturally a few months after treatment ends.