Hair is No Indicator of Virility 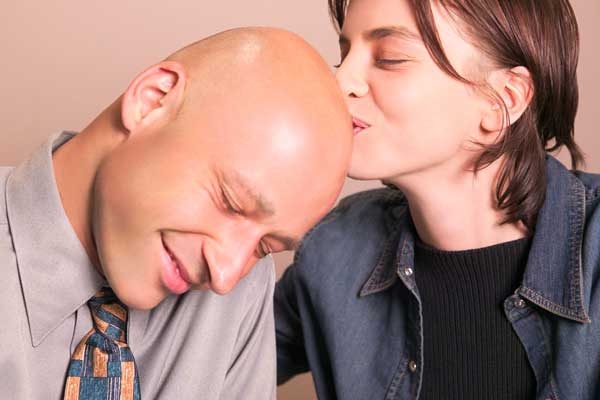 For many years old wives’ tales have suggested that men with bald spots are more virile than their hirsute counterparts. Usually there is some small grain of truth in such stories, which persist through generations based on anecdotal evidence.

Investigating the issue, dermatologist John Burton went on record in 1979 to say, “The suggestion that bald men are more virile than their well-thatched contemporaries is probably an old wives’ tale, but it must be conceded that old wives are likely to be unusually authoritative in this matter.”

So could it be that bald men are more sexually potent?

Where did the story come from?

Since the ancient times of eunuchs being employed to look after the king’s harem, people have realised that castrated men never lose their hair. The Greek philosopher appears to have been the first observer to write about the condition in the 1st century BC.

In the 20th century, anthropologist James Hamilton conducted research on American prison inmates who had been sterilised as part of their sentence. His study found that castration before the onset of hair loss prevented the onset of male pattern balding; whereas for inmates sterilised after hair loss had begun, the balding did not spread, nor did it reverse.

Hamilton correctly concluded that the hormone testosterone, which is no longer produced following castration, played a significant part in hair loss. He was not however able to determine whether baldness and virility were related.

In the end, Burton was unable to provide any link between baldness and these “surrogate markers”, leading him to conclude that head hair had no effect on virility at all.

Into the 21st century

Two medical researchers from the University of Melbourne have recently completed research to finally identify or discredit the hypothesis. They tested 2836 men in total, some of whom had been diagnosed with prostate cancer and others who were clear. Each was assessed for a level of balding (none, receding hairline, vertex and fully bald) by an interviewer.

The subjects were then asked to complete a questionnaire that detailed their history of ejaculations and sexual partners between the ages of 20 and 49. When the results were collected and analysed, the researchers quickly realised that there were almost no differences between the responses, regardless of the hairloss being experienced by each.

The results, published in the Medical Journal of Australia, suggest that not only are bald men no more virile than their hirsute counterparts, but that they probably had fewer sexual partners too. The researchers went on to suggest that much of this discrepancy could be to do with a lack of confidence brought about by hair loss and poor self image.