Bizarre hair trends have no age restrictions; we've seen wigs for babies and now, thanks to their adoption by the omnipotent Kardashian family, hair extensions for children are causing a media storm. 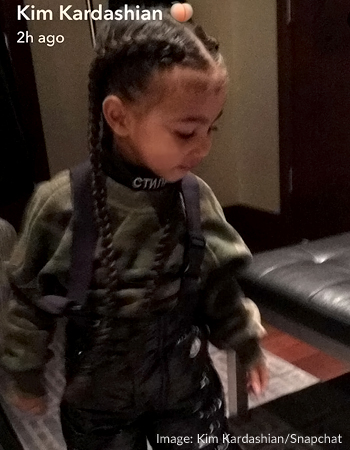 Twitter users have reacted angrily to news that Kim Kardashian has given her two-year-old daughter North West waist-length hair extensions so that they could sport matching hairstyles reminiscent of North's favourite film character, Anna from Disney's Frozen.

The information was revealed during one of Kim's Snapchat sessions and the consensus among social media users seems to be that the child is far too young to be experimenting with such intricate hairstyles. North's three-year-old cousin Penelope Disick, daughter of Kim's elder sister Kourtney Kardashian, has also been spotted with similar extensions to match her auntie, Khloe's hair.

But what’s even more alarming than the idea that the youngster might be hooked on her looks before she’s even started at school, is that extensions can be extremely punishing to the scalp. So much so that neurologists have even called for them to be banned.

They are one of the main causes of Traction Alopecia, a fairly common cause of hair loss brought on by hairstyles that put prolonged and undue pressure on the scalp.

Woven in to hair

We don’t, of course, know the full story the toddler’s hairstyle might have been a fleeting one, in which case the chances of there being a problem are virtually nil. 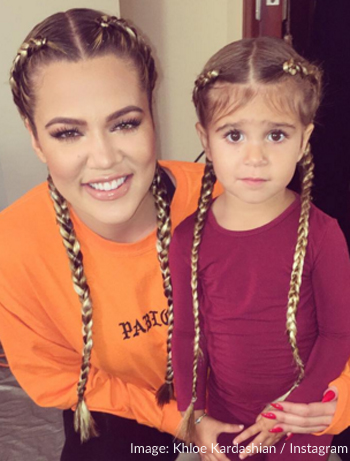 Additionally, it is thought that the extensions were braided in to her existing hair as opposed to being bonded in or attached to the roots like adult extensions - reducing the risk of damage although the extra weight could still be a worry depending on how much hair is added in. It is unlikely much would be needed to create these looks so whilst natural hair is always best, for a fun occasional look, it should not cause any problems. It is fairly common for ribbons to be woven into children's plaits in the same way so perhaps the Kardashian's version is just a little more modern.

What should perhaps be of more concern is the tightly braided hairstyles the toddlers require in order to sport these extensions, and how long they wear them for. North had apparently had her hair braided a day earlier according to the Mail Online, and given her Afro hair type is naturally more brittle and prone to breakage than her mother and cousin's Caucasian hair, this is potentially more problematic.

Alongside hair extensions, tight braids and cornrows are frequently to blame in cases of Traction Alopecia and are particularly common in black women due to the fragility of Afro hair as well as traditional hairstyles encouraging this condition. Whilst many are aware of this condition, a recent hair loss study of African-American women found that the majority do not know that help is available, which it is for both men and women of all races who are aged 18 and over.

What is less well known still is that Traction Alopecia can occur in children, often due to constantly wearing their hair in tight buns, high ponytails or tautly plaited braids without allowing the stressed hair follicles a chance to rest in between. As treatment cannot be given to under 18's, knowing how to prevent this hair loss is key.

Traction Alopecia is the only truly preventable hair loss condition and can easily be avoided by choosing a hairstyle that doesn't put stress on the scalp, or at least allowing the hair follicles a couple of days to rest in between harsh hairstyles. For this reason, it is widely recommended that braids, extensions and even man-buns are never worn all the time whether you are a grown up or a child. 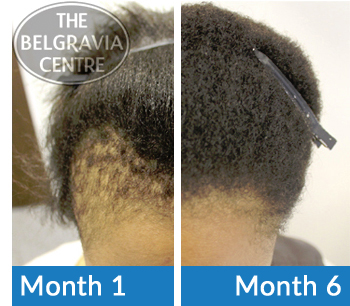 As the hairline tends to bear the brunt of the stress, especially around the temple areas in cases of the type of braids North West and Kim Kardashian have been wearing, Traction Alopecia often causes a receding hairline with occasional weak, 'fuzzy' looking hairs in the areas where the shedding has occurred. Many people refer to it as 'losing their edges' and in order to get them back there are two fundamental points of action.

Firstly, change the hairstyle and wear your hair as naturally as possible to reduce any strain on the hair follicles. Secondly, once the source of the tension has been removed and the follicles have recovered your hair may start to grow back naturally.

In the majority of cases, however, regrowth can occur and following a personally-tailored Traction Alopecia treatment course can help to accelerate this process. Belgravia's specialists have found that using high strength minoxidil formulations, which are applied directly to the affected areas, can be extremely effective, as can be seen in our gallery of Traction Alopecia Treatment Success Stories.

If you are an adult concerned about hair loss or styling damage that is making your hair appear thinner than usual it is always best to have a professional hair loss specialist check it out for you as the quicker you have a diagnosis and treatment recommendations, the quicker you can get started at trying to reverse any deterioration. Also, often the earlier these conditions are dealt with the more likely you are to see results. For children with hair loss we recommend contacting their GP as soon as possible as shedding can sometimes be a sign of an underlying health condition.