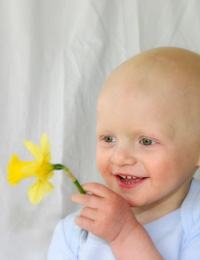 Although baldness and hair loss are often seen as things which only affect people as they get older, the fact is that many children around the world suffer from a range of hair loss conditions. In the same way, when people think of charity they usually think of donating money.  But in recent years, a growing number of individuals have been donating their hair to charity to help children who have lost some or all of their hair.

A number of charitable organisations have been set up around the world in the past decade which aim to help children who have lost their hair due to cancer treatment or conditions such as alopecia, by providing them with hairpieces.

In the US, Locks of Love and Pantene Beautiful Lengths are both popular hair donation charities, while in the UK the Little Princess Trust accepts hair donations which are used to manufacture real hair wigs for both girls and boys who have lost their hair.

While hair loss is distressing for anyone, for children it is particularly traumatic due to their young age and the fear of looking different than other children. These charities aim to help such children by providing them with high quality hair pieces.

While many people associate hair loss in children with cancer and chemotherapy treatment, there are a number of reasons why some children lose their hair. Telogen effluvium is a hair loss condition which can be triggered by a traumatic experience or serious illness. Meanwhile in alopecia areata, the child’s own immune system attacks the hair follicles, causing bald patches, or in the case of alopecia totalis, complete loss of all hair on the scalp.

The Little Princess Trust was set up in 2007 by the parents of Hannah Tarplee, a young girl who passed away after a battle with cancer. After finding it hard to find a high quality children’s wig for their daughter when she lost her hair due to chemotherapy, Hannah’s parents decided to start a charitable organisation which would specialise in providing wigs for children who had lost their hair from cancer treatments and other hair loss conditions.

The charity has since attracted support from a number of high profile names. Gail Porter, who herself suffers from Alopecia Areata, is currently the charity’s ambassador, while former SAS Sergeant and author Chris Ryan, journalist Quentin Letts and Jennie Harrington of the English National Ballet are all Honorary Vice-President’s.

As well as monetary donations towards the costs of providing children with specialist wigs, the charity also accepts donations of hair with which to make the wigs, requiring only that it be between 10 and 12 inches long, in good condition and of a suitable colour for a child’s wig. This hair is then sent to specialist wigmakers in China where it is turned into hairpieces for children suffering from hair loss. If you would like to make a monetary, or any other type of donation to the Little Princess Trust, please visit their website.