Researchers at the University of Virginia (UVA) School of Medicine in America may have made one of the most significant breakthroughs yet in relation to the immune system.
As the alopecia conditions Alopecia Areata, Alopecia Totalis and Alopecia Universalis come under the autoimmune umbrella, this is a major discovery for anyone affected.
It is believed that the exciting study findings could finally establish the causes of autoimmune conditions including Alzheimer's, Multiple Sclerosis and Alopecia Areata. In turn, it is also hoped that this new information could lead to new treatments, or potential cures being developed. 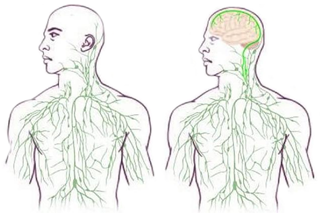 University of Virginia Health System Maps of the Lymphatic System: Before (left) and After this Neurological Discovery

The ground-breaking study, published in the Nature science journal, is believed to have over-ruled previously held beliefs about autoimmune conditions by discovering that the brain is actually directly connected to the immune system.
Speaking to Neuroscientist News, Jonathan Kipnis, PhD, professor in the UVA Department of Neuroscience and director of UVA's Centre for Brain Immunology and Glia (BIG), said, "Instead of asking, 'How do we study the immune response of the brain?' 'Why do multiple sclerosis patients have the immune attacks?' now we can approach this mechanistically. Because the brain is like every other tissue connected to the peripheral immune system through meningeal lymphatic vessels"
The connectors are previously unknown vessels which had - until known - avoided detection; a revelation that is causing waves among the medical community.
Kipnis explains, "It changes entirely the way we perceive the neuro-immune interaction. We always perceived it before as something esoteric that can't be studied. But now we can ask mechanistic questions. We believe that for every neurological disease that has an immune component to it, these vessels may play a major role... Hard to imagine that these vessels would not be involved in a [neurological] disease with an immune component."

Potential to provide a proactive approach to treatment

Belgravia's senior trichologist, Leonora Doclis is hopeful that this discovery will lead to the development of not only new Alopecia treatments, but also ways to manage other autoimmune conditions.
She says,"There is a potential to help Alopecia Areata cases since both MS and Alopecia Areata  are autoimmune-based conditions. The immune system attacks the Myelin sheath in MS while it attacks the hair in Alopecia Areata. Clients always ask why does it happen and we always explain that the precise cause is unknown although factors such as stress and genetics are thought to trigger alopecia. However, this discovery can possibly now answer that question. If they can answer why MS patients have the attack then, they can also do the same with Alopecia sufferers.  The answer to this question provides the potential for a preventative approach. These newly discovered vessels may be hiding a lot from us - and it could hold the key to finding out why our immune system sometimes goes out of sync. This whole study will indeed rewrite a lot of information that we know about the body".
At present there are a few treatment options for Alopecia Areata, with topical applications of high strength minoxidil having been seen to produce promising regrowth in the mild-to-moderate stages of this condition. However, there are no effective treatments available for Alopecia Totalis or Universals which cause total hair loss of the head and body respectively. This latest discovery is particularly exciting for people affected by these conditions as it could prove momentous in terms of developing a reliable form of treatment for all forms of alopecia caused by the autoimmune system.