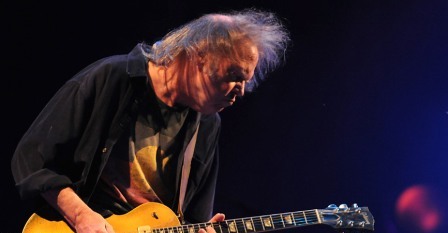 This year’s biggest music festival ended last Sunday night and going by the coverage on the BBC and online, a good time was had by all. The weather was mostly good and the music offered was a diverse mix with something for everyone. However, a few eyebrows were raised when, back in May, the full line-up was announced for this year’s main stage. With Neil Young, Bruce Springsteen and Blur holding the main spot on the Pyramid Stage over the weekend and other headlining acts including Crosby, Stills and Nash, Nick Cave and The Bad Seeds, and Status Quo, the emphasis, with perhaps the exception of Blur, seemed to be on what some were calling ‘dad rock’. And even Blur have semi-retired from being full-time rock stars.

However, the man in charge is Glastonbury head honcho Michael Eavis and not only a bald man himself, but also a man loved by the hundreds of thousands of music fans who attend or watch the festival on TV. The man knows what works and this year, with its fine array of musicians with receding hairlines confidently gracing the main stage, Eavis declared it ‘the best year ever’. 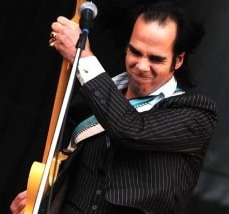 One of those acts, Nick Cave and the Bad Seeds, has been playing for 26 years. The members of the Bad Seeds have changed over the years with the current line-up comprising Thomas Wydler, Conway Savage, Ed Kuepper and Cave’s Grinderman partners. Australian singer-songwriter Cave has been at work for over two decades by making music that is full of doom and gloom. He is best known for a 1996 duet with Kylie Minogue, "Where the Wild Roses Grow", in which he imagines smashing, with a rock, the head of his petite partner.

Grinderman is a side-line project formed by Cave in 2007, the year he turned 50. For those that are unfamiliar with the group’s music, they like to describe it as “foul-mouthed, noisy and hairy”. Grinderman’s debut self-titled album was released in February 2007. In his review, Alexis Petridis of The Guardian particularly praises ‘No Pussy Blues’ describing it as ‘hilarious’ and ‘thunderously exciting’. He describes how Cave “howls his way through a tale of unrequited lust, scarred by the ravages of middle age” with the line "I combed the hairs across my head, I sucked in my gut and still she said she just didn't want to."

Despite what Petridis describes as a ‘tumultuous racket’ of guitars, drums and a ‘relentless scream of feedback’, he says there are moments of ‘ethereal loveliness’ in the album that “seem as indicative of maturity as No Pussy Blues’ ruminations on hair loss and paunches”.

This is not the first time that The Guardian music journalist & GQ music editor Petridis has reflected on the locks of rock. Back in 2003, he was a little more forthright in describing musicians and their hair: “A receding hairline is no fun whoever you are, but for the rock star, hair loss induces mania. Deranged solutions are sought, ones involving headbands, or, in the case of Elton John, a transplant apparently based on the coiffure of homely northern playwright Alan Bennett. The late Maurice Gibb spent his last decade wearing a fedora at all times, under the mistaken impression that this would fool the world into believing he had a full head of hair underneath it.”

However hair, or lack of it, did not seem to bother this year’s main bands at Glastonbury nor their fans. 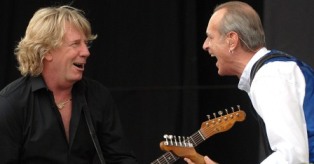 Indeed, the reviews of this year’s set at Glastonbury have been full of praise for Cave and his motley crew. Full marks were given for appearance and music with Dafydd Goff of The Guardian commending them for setting the standard for “sartorial splendor with black pin-striped numbers, aquamarine shirts, gold cufflinks and pendants. Think 1970s Miami Mafiosi. Or Scarface meets Pulp Fiction”.

Goff says that, even minus instrumentalist Mick Harvey, the Bad Seeds are “still an accomplished, versatile backing band” and that Cave continues to push himself as an artist and performer, producing some of his best work. And going by the large number of positive comments made on Twitter, the fans seem to agree.

If you are experiencing hair loss or hair thinning and would like to learn more about available hair loss treatments, please feel free to email us or call on 0207 730 6666 where we can arrange for a free initial consultation with one of our hair care specialists. Alternatively, if you are unable to make it into the clinic, you can fill out the online diagnostic form and a treatment advisor will be in touch with you shortly.