Welsh football star Gareth Bale is said to be planning a trip to a hair transplant surgeon who may be able to help the player deal with hair loss on his crown.

According to the Sun, a source close to the Real Madrid ace says that he has become “so annoyed” at the patches of scalp that can be seen through his hair that he has decided to take action. A number of rather cruel Tweets about his hair thinning are likely to have added to his woes.

The source says that Bale is likely to visit the same hair transplant surgery that his friend Joe Ledley, the Crystal Palace midfielder, is said to have booked himself into. Bale, says the source, will visit when the season finishes in May - the close season being something of a prime hair restoration time for footballers. “Both of them will be out of the limelight for a while, so it it gives the hair plenty of time to settle in,” the source told the Sun. 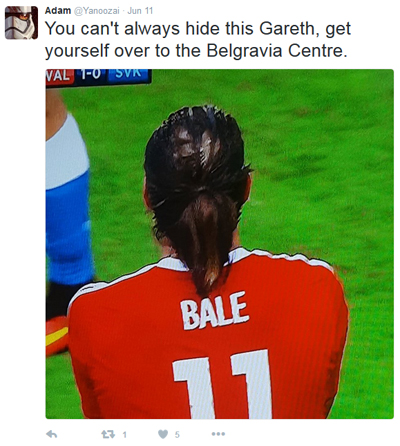 Given Gareth Bale appears to have a thinning crown and also shows signs of a receding hairline it would be easy to put these down to a classic case of androgenetic alopecia, or male pattern hair loss. Male Pattern Baldness, which many men will experience in their lives, is a common genetic condition that affects the top of the scalp and can begin when men are in their teens, but is more commonly seen with each passing decade. It most often starts to present when men are in their 20s and 30s, so, given the Wales international is 27, he is certainly of an age where this could become a problem if he is so genetically predisposed.

The possibility exists that the tightly-tied style Bale regularly sports has led to an entirely different condition named Traction Alopecia. This occurs when people choose to frequently wear a hairstyle that places excessive stress on the scalp styles that pull hair like braids, cornrows and indeed man buns are common culprits. Hair extensions often cause the condition, too.

Man buns can cause problems not just around the crown, where it is worn, but also at the hairline, especially the temples, as this is the area predominantly affected by this extra strain. This can lead to hair breakage and thinning hair at the site where the hairstyle is fixed, as well as a receding hairline where the follicles become stretched and hair fall increases.

Guidelines as to which hairstyles can cause hair loss were issued in 2016 by John Hopkins University in the USA as many women were unaware of this increasingly common issue. It is safe to say that many men are in the dark as to the potentially negative implications of their hairstyling preferences too.

As Gareth Bale exhibits signs of both a receding hairline and a thinning crown, notably in the area where his man-bun is tied, without examining him, we can only speculate as to which hair loss condition he is experiencing. It's worth noting that it is not necessarily an 'either/or' situation; it is entirely possible to have both Male Pattern Baldness and Traction Alopecia simultaneously. It is also frequently the case that surgery is not necessary to correct these types of hair loss.

There are clinically-proven hair loss treatments for men that can be used to ward off and often reverse the signs of male pattern baldness. At Belgravia, hair loss specialists can customise bespoke courses featuring both male pattern hair loss and traction alopecia treatment in order to deal with both issues at once. If Male Pattern Baldness is even one of the reasons behind Gareth Bale's reported hair transplant surgery, he will most likely be advised to try following a course of hair loss treatment for at least six months prior to his operation. This is to stabilise shedding and maximise regrowth before surgery. It is also recommended that hair restoration patients continue to follow the same treatment courses following their op in order as part of the on-going aftercare needed to maintain their look.

As Bale is apparently opting for the surgical route this could simply be because the expensive operations are something of a hair loss solution trend among high-earning footballers who are losing their hair. If Traction Alopecia is a problem, the resulting hair loss may have damaged some follicles so severely that they are no longer functioning. If this is the case then a hair transplant may be his only recourse as pharmaceutical treatment is only effective on functioning follicles; severe Traction Alopecia can sometimes result in permanent hair loss due to the follicles having been destroyed. Whatever Bale's situation, we would heartily advise him to ditch this hairstyle if he is at all worried about his hair - even after his transplant.