Georgia Van Cuylenburg uses Experiences of Alopecia to Inspire Others 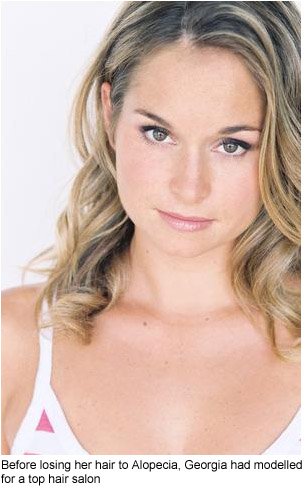 Alopecia, a sudden and sometimes severe condition, can affect people in different ways. Many people are understandably devastated, and react with shock, disbelief and sadness. Some will try everything they can to re-grow their hair. Some try to hide it, and others accept it. And for some people it is a wake-up call that spurs them on to help others.

Australian actress, comedian, and former hair model, Georgia Van Cuylenburg went through all of these stages, and as she reveals in a surprisingly candid article over at the Huffington Post, it eventually made her stronger.

She describes how important her hair was to her, and how at 18 she became a hair model for a famous salon “my hair became even more the thing that I identified as ME. I was now officially ‘the girl with the great hair.’”

By the age of 21, she had moved to Los Angeles and had a burgeoning career as an actress, working on shows for children. It was at that point that Alopecia changed her life.

“One typical Wednesday, as I stood in the shower, I watched as hundreds of my ‘great hairs’ washed down my body. As I rubbed the shampoo through my hair, clumps fell out in my hands,” she says. Georgia goes on to describe how as she, “brushed and brushed I watched my clear white sink fill up with hair. I remember seeing myself in the mirror and holding back the tears. That day my life changed forever.”

After visiting a doctor, she was diagnosed with Alopecia Areata, a hair loss condition which is due to a disorder of the auto-immune system. The exact causes are not known, but in many cases it is suspected that stress and trauma are initiating factors. In Alopecia sufferers, the body’s own defences mistakenly attack healthy hair follicles, causing them to cease producing hair. The degree to which hair is lost can vary, and ranges from patchy hair loss on the scalp, to total scalp hair loss (Alopecia Totalis) and the loss of all hair from the body, including eyebrows (Alopecia Universalis).

In some cases hair loss treatments can help with the condition but Georgia admits to trying everything to remedy her condition, to little avail.

Choosing not to hide

After spending a year hiding her hair loss, which she describes as the “toughest year of my life,” she eventually decided to make a change, to see Alopecia as, “an amazing gift.” Her new perspective on her hair loss spurred her on to not only be open about her hair loss, but to share her story, particularly with children, and led to her creating a documentary about Alopecia and her experiences of it, called ‘Baby Let your Hair Hang Down’.

She hopes that her story will inspire others with Alopecia, and it would seem that her experiences in making the film and embracing her condition have changed her too. “I learned to trust I was good enough as I was,” she says, “that it was the essential me that people responded to with or without hair.”

The Case of Guru the Chimp and Animal Alopecia