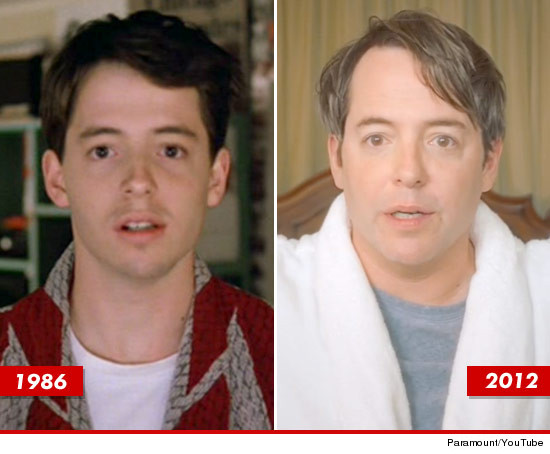 “If you don’t stop and look around once in a while, you might miss it,” were the immortal words once uttered by Matthew Broderick in the hit eighties film Ferris Bueller’s Day Off.  He was of course talking about life, not hair loss, but anyone whose seen his new advert for Honda could be easily misled.

If you haven’t seen the film, Broderick plays the role of teenager Ferris Bueller, who decides that not only is he not going to school today, he’s going to have all kinds of crazy adventures with his two friends into the bargain.

The new advert for Honda’s CR-V sees him reprise the role with tongue firmly in cheek, but for anyone who has failed to see any of his films since Ferris, the most notable thing about the commercial may be Broderick’s balding and receding hairline.

The advert was screened at this year’s Super Bowl a big day for both American Football and commercials on the other side of the pond. It begins with Broderick feigning illness to his agent before embarking on a series of homages to the film, which has since achieved the status of a minor classic. If you want to check out Matthew Broderick’s middle-aged day off, you can find the video below. His original hairline meanwhile can be seen in the original trailer for the 1986 film, also found below.

Ferris Bueller grows up and gets Male Pattern Baldness

Of course, Ferris Bueller’s Day Off first hit our screens 26 years ago, when Matthew Broderick was just 23 years old. Now, with his fiftieth birthday coming up in March, it’s completely understandable that his hair isn’t quite what it used to be. It’s been estimated that 50% of all men will suffer from Male Pattern Baldness by the time they reach 50.

Of course, Matthew Broderick’s receding hairline is far from being the worst case of Male Pattern Baldness, and many people who were themselves just teenagers when the film came out may be today showing more serious and noticeable hair loss.

So, at the age of 49, why hasn’t Broderick lost more of his hair? The secret could well be in his genes everyone suffers from different patterns of genetic hair loss, and to varying extents, based on how their body reacts to the naturally occurring chemical dihydrotestosterone. Some may lose most or all of their hair; others may just get a receding hairline like Matthew Broderick, while some people may not suffer from genetic hair loss, or Androgenetic Alopecia, at all.

If you too are noticing hair loss due to Male Pattern Baldness, contact us at the Belgravia Centre for a consultation, or fill in our online diagnostic form to receive a home-use treatment programme. To paraphrase Ferris Bueller, don’t sit around as the events that affect you unfold, take a stand and defend your hairline. We have the world's largest collection of hair loss success stories, featuring 'before and during treatment' photos and comments written by users of our treatment programmes. We think you'll be amazed at the results that so many men (and women) achieve.

Why Dolly Parton Bleaches Her Hair