Landmark birthdays such as an 18th, a 21st and anything with a zero at the end typically come with an extra dose of razzamatazz and better gifts than the norm, but British teacher Tom Heley got the gift to end them all when his dad shelled out for a hair transplant. 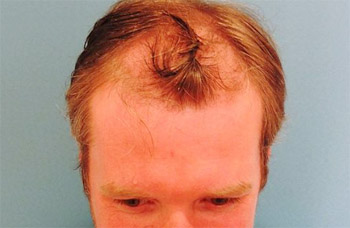 BEFORE: Tom Heley was unhappy with his thinning hair

Tom, who lives in Dorking, Surrey, has been losing his hair to Male Pattern Baldness since he was 21: little surprise, he told the Daily Mirror, when hair loss features heavily in his family. His father and uncles, he says, are all thin on top.

Having tried what he describes as “every product under the sun”, Tom told the newspaper that his disappearing locks steadily eroded his confidence, too, and that he had tried growing his hair long in an attempt to disguise his increasingly visible bald patches. He also acquired a collection of hats to try and hide his rapidly thinning hair. 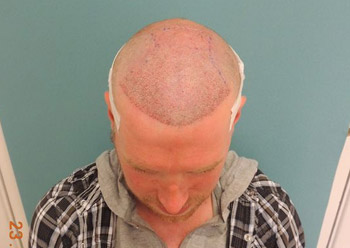 Tom had to shave his head for his FUE hair transplant

No doubt keen to make amends for the hair-shedding genetics he had passed on, Tom’s dad decided that the best 30th birthday gift he could give his son was a hair transplant. Tom was booked into a Harley Street specialist for a Follicular Unit Extraction (FUE) procedure a year ago which required him to shave his head. Eight months later, he was proudly posting pictures of his extravagant new bouffant to friends and family.

“The results have been more than I ever hoped for,” he told the Mirror. “The transformation has been amazing, and my confidence has grown tenfold.”

Tom’s results are indeed impressive, and his “before” shots suggest he would have been a good candidate for hair restoration, with notably thin hair around the crown but a good volume of donor hair. 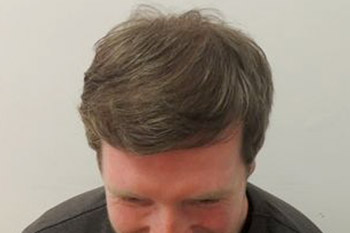 AFTER: Tom was delighted with his results

Not everyone, however, is so well suited: with more severe hair loss or in instances of scarring alopecia there is unlikely to be enough donor hair to go around. In these instances, people sometimes turn to body hair, though specialists in this field are hard to find and the technique is not without its problems - such as the difference in texture.

To maintain his hair, Tom is also likely to need to combat his genetic tendency to shed hair: the hair fall he has experienced to date is because of a testosterone by-product known as DHT. Without treatment to inhibit its formation, DHT will continue to restrict the follicles' ability to produce hair. This will result in miniaturisation of the follicles as they gradually weaken and thin, to the point of causing further hair loss. It is one of the reasons why hair transplants often have to be repeated to get the desired result. 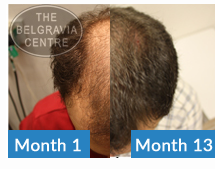 A less intrusive and less expensive way of combating Male Pattern Baldness is a bespoke hair loss treatment course, using clinically-proven medications that have seen thousands of success stories. These courses are also often recommended for use for a minimum of six months prior to a transplant, as well as forming on-going aftercare post-op.

A number of treatment options are available, and a typical holistic approach of the kind offered by Belgravia can include everything from proven male hair loss treatments to head massage, Hair Vitalics targeted dietary supplements, and hair growth boosters devices such as the FDA-cleared HairMax LaserComb which helps to promote hair loss stabilisation and regrowth by using LLLT.

As with most hair loss conditions, an early diagnosis offers clients the best chances of success. Depending on the level of balding when treatment is first sought, the timeline for the first signs of regrowth can vary on a case-by-case basis but these should generally become noticeable after 3 to 4 months. In situations where the hair loss is more advanced, this can take up to 6 months but stabilisation should occur before this point. A hair loss specialist will always take your starting point into consideration when tailoring your treatment plan in order to ensure the components are best suited to your needs and should provide the most effective results.