While tech visionary Elon Musk might only have been a household name for a relatively short time, industry insiders have known about the South African-born billionaire since the late 1990s back when he clearly had issues with hair loss.

Images of the Tesla Motors/SpaceX CEO that go back to the days of his early successes show a man in his 20s who is struggling with male pattern baldness, the genetic condition that will be experienced by at least half of all men in their lifetime.

It is something that Musk’s fans talk about on chat forums, because the difference between Musk at the turn of the millennium and today is quite striking. The entrepreneur as the world knows him now has a good head of hair, as illustrated here. 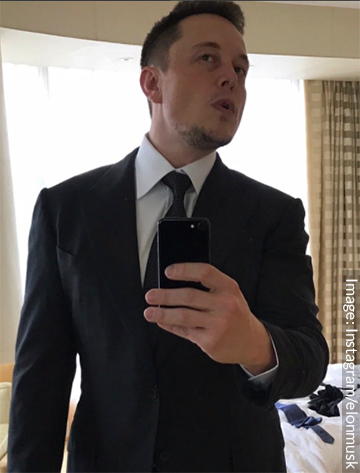 
Musk’s regrown receding hairline and his fans’ fascination with it is something that is being explored in a new art project by cutting-edge New York artist KATSU, a man who once painted Facebook's Mark Zuckerberg using faeces instead of paint. For a new exhibition which delves into the dangers of artificial intelligence (of which Musk is an opponent), KATSU created a series of promotional posters depicting the billionaire back when he was losing his hair.

Quoted in Wired, the artist says: “I’m pretty blown away at how good his hair plugs are. It’s like the perfect metaphor of what you get when you reach his level of success. You get your f------ hair back.”

“How did Elon Musk grow his hair back?” is a topic that has even been addressed on Quora (the most ‘upvotes’ going to a response that suggests a hair transplant is the most likely answer). Indeed, the “hair plugs” that KATSU alludes to means that the artist also thinks Musk must have had hair restoration surgery, as this is an old-fashioned term for the operation.

The term originated from the way groups of grafted hairs looked in the early days of Follicular Unit Transplantation (FUT) surgery. Before it became the sophisticated procedure it is today, the strips of follicles that were taken from the areas unaffected by male hair loss - the back and sides of the scalp - were taken in larger groups than happens now. These were then “plugged” into the necessary areas. The results were often somewhat clunky and obvious compared to that of modern surgeries, and could often resemble doll's hair.

If Elon Musk had a hair transplant, we'd wager it was likely to have been a far more technologically-advanced affair. The ARTAS robot is one option he may have considered, where a machine harvests the hair for the surgeon to then graft into the scalp by hand. In these instances, the result can be more precise and natural-looking with little down-time, though it can take up to 12 months for the grafts to settle in. Further operations - assuming there is sufficient donor hair - may be required to obtain the fullness the client is looking for, too.

It is not confirmed if Musk did or did not have surgery, or indeed how he regrew his hair. It could be that the man who placed 21st on Forbes' Most Powerful People list, chose a more discreet route to regrowing his hair - assuming he isn't wearing a hair system.


Many men, however, choose not to go down the transplant route not least because it is very expensive, it can be painful and the initial signs of surgery are impossible to hide. For weeks after the operation there is very visible evidence of the procedure (the newly-implanted area clearly looks like it has been subject to surgery), meaning that unless you can hide yourself away, or constantly wear a hat, for at least a few weeks, everyone will know. 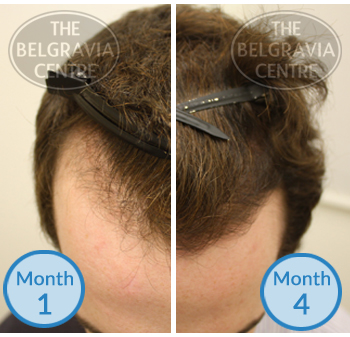 
A hair transplant is often avoidable if action is taken before baldness sets in; this is where the scalp takes on a smooth, shiny look as the hair follicles no longer function. Interestingly, patients are often advised to follow a non-invasive male hair loss treatment course for six months before the operation. This is so that the shedding has a chance to stabilise and maximise hair growth, giving the surgeon a cleaner area and more hairs to work with.

It is also explained to men considering restoration surgery that this course should also be followed on an on-going basis after the transplant. This is because only the new grafts will be unaffected by male hair loss moving forward - the rest of the top of the scalp and hairline will continue to be subject to the effects of DHT. Therefore, in the interests of preserving the settled, post-op look, aftercare is required to continue preventing baldness.

Each client's dedicated hair loss specialist will tailor a custom hair loss treatment programme to their level and pattern of thinning, as well as their medical profile and lifestyle needs. These are based around either or both of the only two MHRA licensed and FDA approved drugs for male hair loss: finasteride 1mg and minoxidil. Topical applications of high strength minoxidil are designed to encourage hair growth, whilst the once-a-day tablet finasteride 1mg is a DHT-blocker.

The advantage of a hair loss treatment course comprising these clinically-proven medications and additional hair growth supporting products, is that it can be followed discreetly. Also, where the support of a hair specialist is sought, on-going monitoring can mean any necessary tweaks can be made, where appropriate, in order to ensure the course is always meeting the individual's needs. For instance, if there are any changes such as illness, stress or where a man starts taking new medication - all issues which can accelerate the rate of shedding. As one of the world's leading tech innovators, a notorious party-goer and a father of six, we're betting stress is something Musk is fairly familiar with!