The paper, published on 30th July in the Scientific Reports journal, reports how these mice trials also showed that, by using an experimental compound known as D-threo-1-phenyl-2-decanoylamino-3-morpholino-1-propanol (D-PDMP), they could also reverse these effects.' 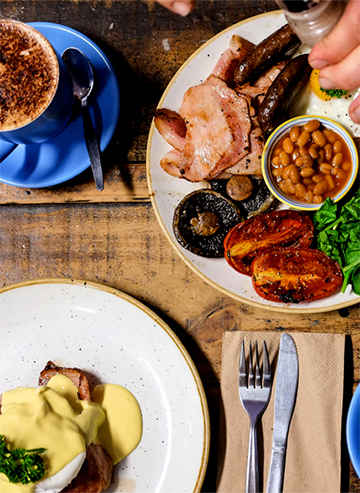 Whilst the exact hair loss condition in question is unspecified, it does not appear to be androgenetic alopecia - Male Pattern Baldness or Female Pattern Hair Loss. However, the team hopes that this discovery may one day help in accelerating wound healing, treating skin disorders such as psoriasis, and preventing baldness, which does suggest a link between the genetic hairloss conditions may be forthcoming.

It shows that the man-made compound D-PDMP was capable of stopping production of glycosphingolipids (GSLs). These are fats that play a major role in the skin's cellular make-up, being concentrated in the uppermost layer, as well as being found in other cells, including keratinocytes. These are involved in pigmentation and help to determine eye, skin and hair colour.

The animal trials involved two groups of mice, all of which were genetically modified to have the clogged artery disease, atherosclerosis, ahead of time. The groups were fed on different diets for a period of eight weeks, with all mice being 12 weeks of age at the start; one diet was high in fat and cholesterol, one consisted of 'standard chow'.

When the two groups were compared at the end of this period, researchers noted that those mice fed a Western diet experienced hair loss, hair whitening and developed skin lesions. When results were compared after each group continued on their allocated diets for a total of 36 weeks, this became even more obvious with a reported 75 per cent of the Western diet mice displaying these severe symptoms. Continues below... 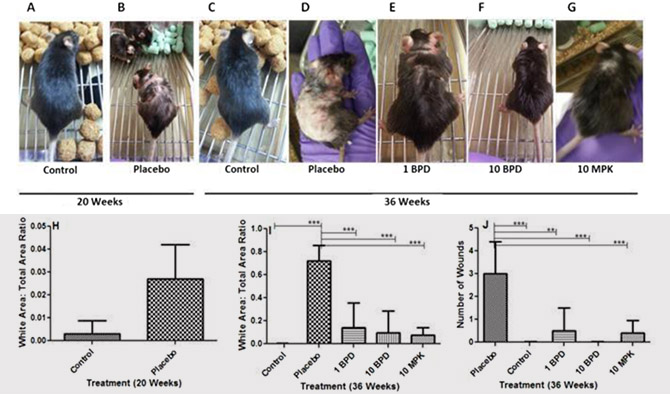 Phenotypes of Apo E−/− mice skin and hair fed with and without western diet. (A) represent mice fed normal chow diet. (B,H) ApoE−/− mice fed a western diet from 1220 weeks with moderately increased hair whitening, loss of hair, skin inflammation and lesion formation. (D,I) shows extensive loss of hair, skin lesion when the western diet was continued to 36 weeks of age, compared to ApoE−/− mice fed chow for 36 weeks (C,I). (E,F) mice fed a combination of western diet and 1 mpk BPD (E) and 10 mpk BPD (F), from 20 weeks to 36 weeks, with ameliorated hair discoloration, hair loss, and skin inflammation 1 G. Mice treated with 10 mpk unbound D-PDMP and fed western diet. This treatment also reduced the occurrence of these pathologies (G,I). Note treatment with 1 mpk BPD was as efficient as 10 mpk of native /un-encapsulated D-PDMP in regard to hair discoloration and hair loss (I). (N = 5 p < 0.05). Quantitative analysis shows 75% of skin area had hair loss, discoloration and inflammation (I) in placebo mice. Treatment with BPD or D-PDMP interfered with this phenotype in dose-dependent. And 1 mpk of BPD was as effective (87%) as 10 mpk of D-PDMP (83%) in wound healing (I,J). A nonparametric one way ANOVA using the Bonferroni’s comparison test was performed. *p < 0.05, **p < 0.001, ***p < 0.001; n = 35.  (Source: https://doi.org/10.1038/s41598-018-28663-9)


Following the initial 8 week assessment, when the mice were aged 20 to 36 weeks old, some from each group were given varying amounts of D-PDMP. These were administered in capsule or liquid form and all mice continued on the same diet they had been placed on originally. The following discoveries were made:

- Western diet mice receiving 1 milligram and 10 milligrams of D-PDMP per kilogram of body weight in capsule form started to regrow hair, their original hair colour began to return and their skin inflammation lessened.

- Western diet 'experienced an infiltration of neutrophils, a type of white blood cell implicated in inflammation, in various skin areas'. The number of neutrophils were 'significantly reduced' when treated with D-PDMP in capsule form, implying this type of treatment can also reduce skin inflammation and help with wound healing.

- Western diet mice had decreased total levels of ceramide and glucosylceramide - types of fat which retain the skin's moisture - and almost three times more lactosylceramide (involved in causing inflammation), that the mice on a regular diet.


Whilst these findings represent significant discoveries, given these were drawn from mice trials, human trials may not necessarily produce the same results. Subroto Chatterjee, Ph.D., M.S., M.Sc., professor of pediatrics and medicine at the Johns Hopkins University School of Medicine, and one of the study's lead authors commented on the research: 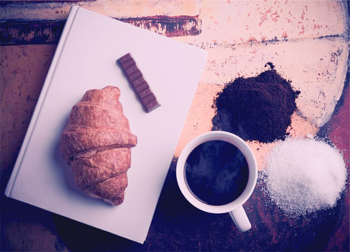 “Further research is needed, but our findings show promise for someday using the drug we developed for skin diseases such as psoriasis, and wounds resulting from diabetes or plastic surgery. Our findings show that a Western diet causes hair loss, hair whitening and skin inflammation in mice, and we believe a similar process occurs in men who lose hair and experience hair whitening when they eat a diet high in fat and cholesterol.

Hopefully someday in the future this can mean faster, more effective recovery from baldness, hair whitening in ageing populations and wound healing.”

Diet and hair loss have many links which can contribute to temporary forms of shedding from all over the scalp - such as Telogen Effluvium - or can exacerbate cases of Male and Female Pattern Baldness where genetics is the main driver and only the vertex and temporal areas of the scalp are affected. It is worth remembering too that hair loss is certainly prevalent across the world and not limited solely to Western countries. Previous research has linked the rising average amount of sugar consumed as in people's diet worldwide, including hidden sugars in food and drink, to thinning hair, though it is an extremely complex problem and may involve many different factors. Anyone worried about losing their hair should consult a specialist in order to obtain a timely diagnosis, from which a prognosis and hair treatment options can be recommended.