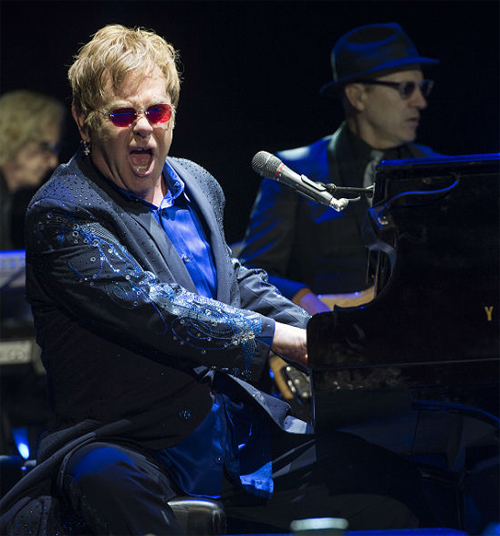 As one of the star turns at London's iTunes Festival 2013, Elton John rocked central Camden. With a blend of new tracks complementing old classics, the enduring legend held a capacity crowd of 3,000 spellbound.

Throughout the concert, large images from Elton’s music videos were projected onto a screen behind the stage, giving a glimpse of his impressive back catalogue.

However, eagle-eyed concert-goers will have noticed a significant difference in Elton’s hairline between his 80s heyday and the present. Unlike many other 66 year-olds, the honorary President of Watford FC appears to be gaining, rather than losing, hair.

During his performance of I’m Still Standing, projected images showed Elton John in 1983 with a clear case of male pattern baldness. However, 30 years later his receding hairline appears to have undergone a miraculous transformation. For many years there has been a suggestion that Elton John wears a hairpiece, but developments in medical hair loss treatments mean that the hair could in fact be his own.

As a self-confessed former alcoholic, bulimic, and ex-cocaine user, it’s possible that Elton’s lifestyle could have played a role in his hair loss. Cocaine use has been identified as a cause of Telogen Effluvium, a hair loss condition that causes hair to stop growing temporarily.

Elton John claims to have been drink and drug free since 1990, since when his hair loss may have stabilised. However it is unlikely that this alone can account for the extraordinary recovery of his hairline - something the icon has rarely spoken about, though he has confessed to not liking his appearance without hair as he feels he "looks like Shrek".

The Candle in the Wind star was ably supported by Tom Odell whose impassioned vocals and energetic piano playing perfectly mirrored those of Elton himself. And at just 22, it is little wonder that Odell sports a mop of long, blonde hair.

But as Elton’s own experience shows, hair loss can begin at any age. Indeed a surprisingly large one-fifth of men may already be experiencing significant hair loss at the same early stage in adult life.

If he is determined to maintain his glossy locks, Odell will need to keep an eye on his hairline for signs of loss, and seek professional advice at the earliest opportunity should he note increased shedding of hair.

Many men worried about their hair loss often turn first to the use of hair pieces or even surgery to hide or reverse the loss. Here at The Belgravia Centre we use a combination of clinically-proven medications and complementary treatments to encourage stabilisation of hairloss and healthy hair regrowth. You can see a selection of our many success stories for examples as to the kinds of results our clients have experienced.

What is the Best Way to Treat a Receding Hairline?'

What is the Best Way to Treat a Receding Hairline?'