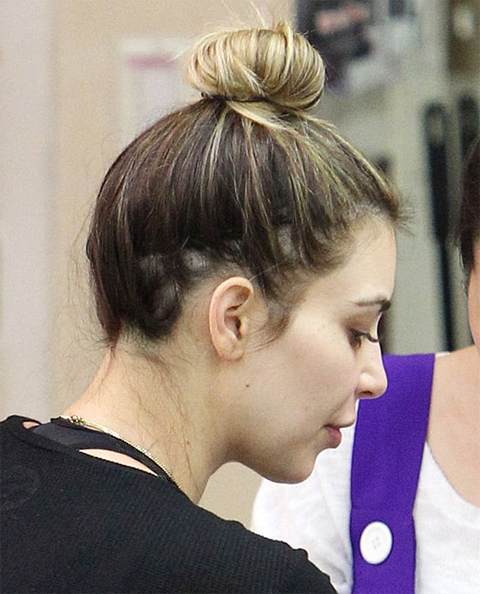 Just weeks after her sister Khloé was photographed showing clear signs of hair loss, Kim Kardashian has been pictured with similar signs of balding. This apparent coincidence probably does not however point to any kind of problem with the family genes, however, as Kim’s hair loss is most likely caused by a very specific factor: her recent pregnancy.

Normally only 90% of a person’s hair follicles are actively growing new hair at any point in time the other 10% are in a resting phase known as ‘Telogen’ and no hair grows from these follicles. Pregnancy, however, activates all of the mother’s hair follicles, explaining why pregnant women have such a lush, thick head of hair.

Following pregnancy, normal hair growth cycles resume, so 10% of hair follicles enter the Telogen phase once more. Although completely normal, the sudden resumption of Telogen can lead to dramatic hair loss, confusing and worrying many mothers. Post-pregnancy hair loss is, however, completely normal, as we explained in our blog post commenting on Kim's full head of hair during pregnancy.

Are other factors at work?

Normal pregnancy-related hair loss is the most likely, but not the only, explanation for Kim's recent hair loss. A strict diet and exercise regime has helped Kim quickly re-establish her pre-pregnancy figure after the birth of baby North West: something that received much attention in the press.

Such extreme weight loss techniques have been known to exacerbate hair loss, suggesting that the bald patches spotted on Kim’s head could be caused by a combination of factors. Poor nutrition, or not enough vitamins and minerals, may mean that her hair is not receiving all the nutrients required for healthy growth.

Kim is clearly aware of her hair loss and has been using hair extensions and weaves to try and hide it. Using hair weaves is a popular technique used by celebrities to minimise the appearance of bald patches, but they can actually make hair loss conditions worse.

Hair loss caused by a condition known as Traction Alopecia is becoming increasingly common in women using hair extensions. The tightly-woven hair extensions place tension on the wearer’s hair, causing the hair follicles to stretch out of shape. Eventually these deformed hair follicles stop growing hair, causing bald patches to expand. It is thought that Khloé Kardashian’s hair loss was as a result of extensions-related Traction Alopecia.

Hair loss following pregnancy is completely normal and as such, Kim has no reason to worry. If in doubt, an appointment with a hair loss specialist will help calm her fears and confirm that there are no other factors causing the appearance of bald patches.

In the meantime, Kim would be well-advised to avoid tight-fitting hair weaves and, if possible, avoid any kind of hair extensions until her own hair has a chance to grow back. Failing that, the use of clip-on extensions or a masking agent will help reduce the appearance of bald patches without placing the rest of her hair at risk of falling out.