Pattern baldness, more properly known as Androgenic Alopecia, is the most common cause of hair loss in men and women across the world. Caused by a genetic predisposition, Androgenic Alopecia is a progressive condition characterised by a receding hairline and the development of an expanding bald patch at the top of the head. 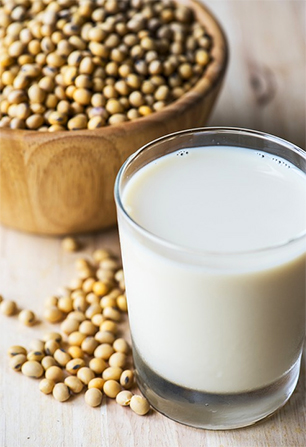 As well as seeking treatments that can cure or prevent hair loss, researchers also routinely try to identify ways to delay or reduce shedding. Chinese researchers have recently announced some surprising results from their study of “blood and urine heavy metals concentrations, environmental exposure factors, personal behaviours, dietary intakes and the genotypes of related susceptibility genes in patients with androgenic alopecia”.

Of the 1560 Taiwanese men tested, those who exhibited less hair loss also had higher concentrations of the metal vanadium in their blood stream. Typically used as an additive to strengthen steel, vanadium is not considered a vital part of the human diet. Because of this finding, researchers suggest that small amounts of vanadium could help reduce the effects of Androgenic Alopecia.

Another surprising observation was that men who regularly consumed soy bean drinks also lost less hair. At this point in time the research team have not investigated whether there is a specific ingredient in soy drinks that reduces the effects of Androgenic Alopecia.

Why are these observations important?

Perhaps the most important factor of the research, published under the title ‘Androgenic Alopecia Is Associated with Less Dietary Soy, Higher Blood Vanadium and rs1160312 1 Polymorphism in Taiwanese Communities’, is that all of the men tested also carried the genetic markers that indicate susceptibility to male pattern baldness. Because these men should have been experiencing hair loss, the conclusions drawn are quite important.

Further research will need to be performed to confirm whether dietary adjustments involving vanadium and soy drinks can really delay hairloss: at the current time, hair experts are agreed that no amount of dietary control can delay genetic hair loss, more commonly referred to as Male Pattern Baldness or Female Pattern Hair Loss.

All hair loss experts do, however, recommend that men and women concerned about thinning hair should eat a nutritionally balanced diet in order to keep their hair as strong and healthy as possible.

For those wishing to top up their dietary intake, a highly-targeted hair supplement, such as Hair Vitalics - which has been specially formulated by Belgravia's hair experts to include the optimum blend of vitamins, minerals, amino acids and botanical extracts including biotin, zinc and selenium - to help maintain healthy hair growth.