Emojis have become a familiar communication fixture for many since their inception in 1999, and the more popular they become, the more obvious it becomes that some pertinent choices are missing. 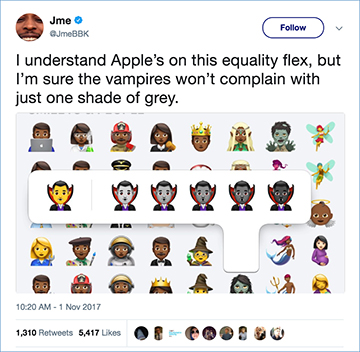 First, people emojis were made available in a range of realistic skin tones, as well as the neutral yellow option. Then emjoi such as the woman in a hijab, and male and female versions for jobs and sports - such as police officers, construction workers, dancers and runners - were rolled out.

This laudable bid for equality and representation became the subject of a popular meme (pictured) when grime star, JME, noticed even vampires were now available in a range of shades.

Still, one thing that eluded the organisation in charge of emojis - the Unicode Consortium - was icons depicting different hair types and colours, including being bald.

In Autumn 2017, following a petition from a campaigner with hair loss caused by the autoimmune disorder Alopecia Areata, it was announced that bald emoji would be introduced in June 2018. In January 2018 it was further confirmed that redheads and people with curly hair and grey hair would also be added to the roll-out. But as the anticipated release date - 5th June - came and went, people wondered if this would ever happen. 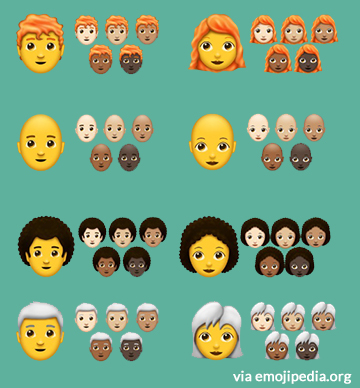 
It turns out, despite the version 11.0 Unicode update being released on time, it takes a while longer for smartphone companies to adopt the new update and make it available to users. The beta version of the iOS 12 software update for iPhones and apple products was released in beta format on 10th August 2018 to those who signed up for it but the full roll out has only just happened for apple and Android users.

It had been expected that following this release, the following emoji would finally be released in the UK, allowing both men and women with Afro hair, ginger hair, curly hair, grey hair (without being old - the only previous emoji-based options for depicting grey hair were the granny and grandad icons) and those who are bald, having lost their hair due to alopecia, cancer treatment or even just from shaving their heads, to feel fully represented... However, according to emojipedia, these have now been delayed until any time between October and December 2018.

Riding this wave of equal representation into 2019, the next batch of emoji releases appear to feature on disabilities, with candidates including a guide dog emoji, hearing aid and prosthetic limb emojis, plus manual and motorised wheelchair emojis.

A couple of additions have also been proposed in the food category which we suspect may be used rather a lot in certain hair loss discussions: an onion emoji and a garlic emoji. These two allium vegetables are frequently cited as natural hair growth remedies and hair loss treatments. Though, as these assertions are entirely incorrect, those committed to a routine of applying onions to their scalps in the hope of regrowing hair may end up glad of the new bald emoji! 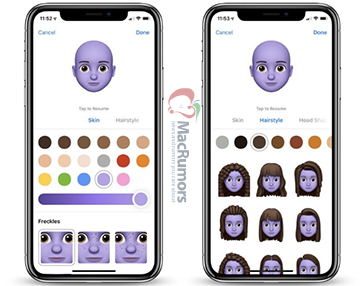 
Another option the phone operating systems updates has provided, though currently only available iPhone X users, is the ability to create a Memoji - an animated avatar to represent yourself. This allows users to customise everything from skin tone, face shape, freckles, hair type and colour - or total baldness - to the shape, colour (and presence or lack) of eyebrows, facial hair, glasses and accessories such as hats.

These are available now so if you cannot see the new features on your phone, check your settings to ensure you have installed the latest software updates.

Memojis can be saved and sent as gifs in chats or used to replace your own face in FaceTime conversations. You can find instructions on how to put one - or more! - together on the Macrumors website.

Can Losing Weight Return Grey Hair to its Natural Colour?

Can Losing Weight Return Grey Hair to its Natural Colour?