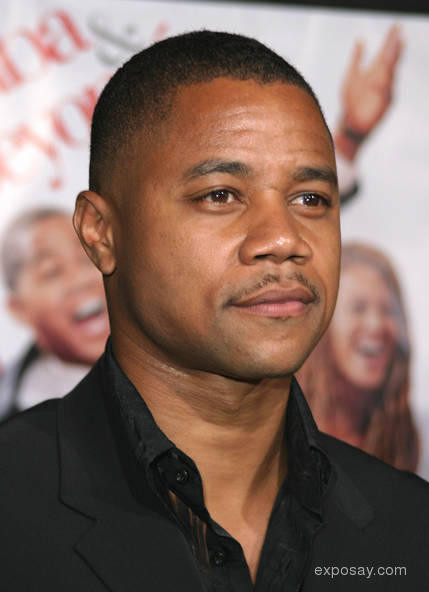 We recently looked at the hair loss suffered by R&B star Ne-Yo, and revealed how he had been teased by co-stars on the set of upcoming movie Red Tails because of his receding hairline. But what of the hairlines of his co-stars themselves?

Perhaps the most well-known actor amongst the ensemble cast of the upcoming movie about the Tuskegee Airmen in World War Two is Cuba Gooding Junior. At age 44, one might expect the veteran actor, who has previously starred in blockbuster smashes such as Jerry Maguire, Pearl Harbour and American Gangster, to be losing at least a little hair. But all signs so far suggest that his hairline is holding strong, despite the occasional close shave or crew cut for film roles.

So how is it that Cuba Gooding Junior’s hair loss is more or less non-existent while Ne-Yo, who is only 32, has suffered a rapidly receding hairline that has resulted in him frequently wearing hats in public?

Is age a reliable predictor of hair loss?

Though getting older is commonly thought of as the primary trigger for hair loss, the fact is that this is not always the case. The hair loss condition most frequently associated with middle-age hair loss is Male Pattern Baldness. This is a genetic hair loss condition which can be passed on in the genes from either the paternal or maternal side of the family. However not all individuals carry this gene in their DNA makeup, though it is estimated that 50% of all men and women will suffer from this kind of hair loss (scientifically known as Androgenetic Alopecia) to some extent by the age 50.

However many men do suffer the onset of Male Pattern Baldness much earlier than this in their lives, sometimes in their late teens or early twenties. This is why Ne-Yo has significant hair loss already, despite his relatively young age.

As for why Cuba Gooding Junior doesn’t appear to be suffering from any noticeable hair loss, it may be that he is simply not genetically predisposed to suffer from substantial hair loss.

In individuals with the gene for Androgenetic Alopecia, hair loss is triggered when the naturally occurring enzyme 5-alpha reductase transforms testosterone into the more potent dihydrotestosterone (DHT). It is this DHT which gradually causes hair follicles to shrink, so that eventually the hairs they produce are practically invisible to the naked eye. But in individuals who do not have the gene for Male Pattern Baldness, this process does not take place.

Or, it may be that Cuba Gooding Junior began treating his hair loss many years ago when it first presented itself. This is entirely speculation, but it is possible that if Cuba had begun using the appropriate hair loss treatments before his hair loss was noticeable, he could have reversed any hair loss that already taken place, and prevented any further hair loss by continuing to use the treatments.

Another of Ne-Yo’s co-stars, hip hop rapper/ actor Method Man, also shows little sign of experiencing hair loss, despite approaching the age of 41. Actor Terrence Howard (42), who stars in Red Tails as Colonel AJ Bullard shows some signs of a receding hairline and has a particularly prominent widow’s peak, but his hair loss is not as severe as that of his younger co-star Ne-Yo.

Once again, hair loss treatments may be the reason for this, but this is again pure speculation.  25 year old co-star Elijah Kelley meanwhile is showing early signs of also suffering from a receding hairline.

The differing levels of hair loss amongst the many actors who star in Red Tails are a perfect illustration of how genetic hair loss can affect everyone differently, and some people not at all.

Treatments for Male Pattern Baldness at The Belgravia Centre

It’s important to note though, that if you are suffering from hair loss, you don’t have to suffer in silence and let your genes dictate your hairline. At The Belgravia Centre we regularly help people who are suffering from Male Pattern Baldness, and its female counterpart Female Pattern Hair Loss to prevent further hair loss and reverse the process.

We use scientifically proven hair loss treatments and hair growth boosters to stabilise and re-grow, as part of a well thought out comprehensive strategy towards tackling hair loss. Our hair loss experts treat each case on an individual basis, to determine the best course of action for you.

To find out more about how we can stabilise and even reverse your hair loss, contact us today to arrange a consultation with no obligation. Alternatively, fill in our online diagnostic form to receive a home use treatment programme that can be shipped anywhere in the world.


Gene Linked to Early Hair Loss in Men and Women