No idle pub claim, that's the cold assessment of Ronald Noble, the Secretary General of Interpol who says that 40 years of terrorism has killed about 65,000 people, while 200,000 people died from the use of counterfeit drugs last year alone, and that's just in China.

It's a growing problem in the UK too. UK customs seized 500,000 counterfeit pills last year... but they only check 0.1% of the pharmaceuticals entering the country. It doesn't take much to estimate that for every man, woman and child in this country there are eight counterfeit pills entering the country every year. Your chance of encountering one is probably higher than you think. 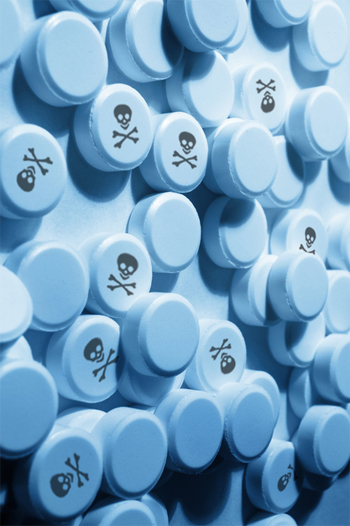 Why are counterfeit drugs a problem?

- They may contain very little or no active ingredient. So you won't be getting the medication you need or paid for, leaving you vulnerable to the illness you're trying to cure
- They may contain harmful chemicals by design
- They are not made to the same standards, so may contain impurities. Recent findings include anti-freeze and lead-based road paint.

When you pay money for counterfeit drugs, you're supporting criminality and undermining society.

A research project conducted by Pfizer in September 2008 in UK cities concluded that 10% of men admitted to buying prescription-only medicines from unregulated sources such as the Internet. It is estimated that between 50-90 per cent of medicines sold on the Internet have proven to be counterfeit which means they are taking a real gamble with their health. This led Pfizer to work with other agencies to produce a hard hitting cinema ad showing a man regurgitating a dead rat after taking medicines purchased online that contained rat-poison. This was only suitable for viewers over 15 years of age.

The MHRA also launched a #FakeMeds campaign to help raise awareness of the fact that 'more than half of all medications bought online are fake'. Its dedicated website advises people on how to report suspected fake drugs, their vendors and how to check whether an online pharmacy is genuine.

It's perfectly legal in the UK for a pharmacy to trade online. All UK pharmacies (including online ones) have to register with the Royal Pharmaceutical Society of Great Britain. Each should have a registration number which you can check here. The Belgravia Centre houses a specialist trichological pharmacy at each of its Central London and City of London hair loss clinics, registration numbers 1085323 and 1115610, respectively.

A reputable online pharmacy will insist on a doctor's prescription and confirm your order online. Alternatively, the Belgravia Centre has its own doctor working in the centre who can raise prescriptions as required. Disreputable pharmacies will allow you simply to buy.

How can you tell if an online pharmacy is registered in the UK? Online pharmacies that wish to evade regulation can do so easily by setting up in a country with lax laws and enforcement. Nothing stops someone in the UK viewing that company's website, which they may have designed to make it look like they are in the UK. At least check for a UK address, and if you happen to know there's a physical presence here in the UK, that's even better.

You may feel that having drugs shipped from China is a good thing, providing lower prices and a way to escape from the hegemony of big pharma. The problem is, you do get what you pay for. If the price you see seems too good to be true, it probably is. The World Health Organisation says that of online pharmacies that don't give an address, 50% of the drugs they sell are fake. No-one knows how many deaths have occurred in the UK as a result of either impurities in the fake drugs, or because of people not getting the medication they need (but thinking they are).

Of course, you should always check any website provides a clear postal address and contact details before making a payment. A site that doesn't is in breach of the Distance Selling Regulations and should be reported to your local Trading Standards office.

In 2007 the Daily Mail reported on the 'biggest counterfeit medicine scam ever uncovered in Britain'. The scam involved sales of the hair loss medicine Propecia, as well as other well-known medicines such as Viagra and Cialis.

Even officials who work full time in this area can no longer tell if a drug is fake just by looking at it or its packaging. Recently the manufacturer of an anti-malarial drug added a hologram to its blisterfoil pack to beat the counterfeiters. It was copied within a month.

Men are a particular target. With a tendency to wait until things are bad before turning up to their GPs, men are more likely to avoid embarrassment by self diagnosing and self medicating. According to Scotland on Sunday, detectives say this is 'pushing people into the hands of Internet dealers linked to organised crime'. UK men are contributing as much as £10.2m per year to the counterfeit medicines market.

Criminal gangs are moving from producing lifestyle drugs such as Viagra to copying lifesaving drugs such as the fake Zyprexa (a treatment for Schizophrenia) that found its way into the NHS last year. Doing so targets people at their most vulnerable. Many youngsters in Haiti died last year from being given a fake cough syrup. 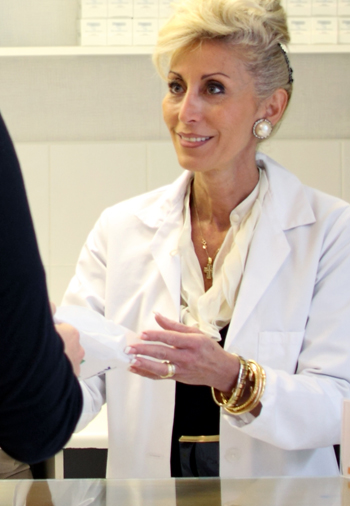 Some warn not only of the problems of funding crime, but of the links between criminal gangs and terrorist groups, and of the possible vulnerability of the UK to an unconventional terrorist attack using fake pharmaceuticals. Buying fake drugs, then, becomes an issue of social responsibility. It's about what sort of society you want to live in.

The fightback has begun. UK Customs has set the search for counterfeit drugs on a level with the search for hard drugs such as heroin. People who campaign on road safety issues often say something like "it'll take someone being killed before they lower the speed limit here". Wrong as that may sound, if true, at least that means the authorities are watching and assessing the risks and allocating their resources accordingly.

Officialdom has to be able to justify its actions. After Thalidomide, when a drug prescribed to pregnant women was found to produce severe birth defects (typically, very short limbs), new rules were introduced to ensure drugs were tested for safety during pregnancy.

The cost of developing a new drug is about $800m, and those costs have to be recouped within 20 years of the drug's invention. Pharmaceutical companies would surely like to reduce these costs, but the drug safety and efficacy testing regime represents the sum of our experience in how to develop, manufacture and deploy drugs safely. In other words, when something goes wrong, action is taken to ensure it doesn't happen again.

That, plus the work of the police, customs and everyone else involved gives us confidence generally that the drugs we are prescribed and buy from reputable pharmacies are effective, worth the money, and safe to use.

As we mentioned, both Belgravia's City of London and Central London hair loss clinics have their own dedicated pharmacies on-site. This enables clients who visit the centres to collect their medication, safe in the knowledge it has come from a reputable source.

For those based outside London, or abroad, hair loss treatment course components - whether medication, shampoo or hair growth supporting products such as Hair Vitalics - can be sent from our pharmacies to anywhere in the UK as well as to most countries worldwide. Anyone interested in this service should first complete an online consultation in order to receive a diagnosis and personalised hair loss treatment recommendations from one of our specialists. From there, you can discuss these options and decide which solution is best for you before having them dispatched by post or courier.