Could your hair care regime be causing hair loss? 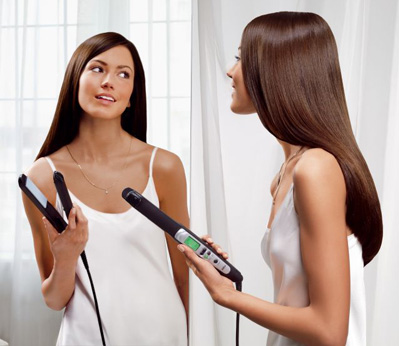 There are many potential causes of thinning hair in women, but hair loss experts are reporting increasing numbers of women seeking treatment for dull and thin hair. These same experts are blaming much of this sudden rise on changing hair care regimes, particularly the increased use of hair straighteners.

Experts believe that advances in technology have led to the creation of straighteners which can reach 200˚ Celsius in less than a minute. Previously straighteners took up to 20 minutes to reach an acceptable temperature. This meant  that women did not have the time to wait, reducing the frequency with which hair was straightened.

Convenience comes at a cost

The convenience of modern straighteners comes at a cost. Modern hair straighteners typically operate at 200˚ or more; however human hair can only withstand a maximum of 180˚ before sustaining damage. When hair is exposed to high temperature, the protective outer of each strand is damaged, causing hair to look dull and lifeless, and increasing “frizz” between straightenings. More frizz means more straightening, which perpetuates a vicious cycle known by some hair loss experts as ‘straightener addiction’.

However, a loss of gloss is only the start of the problems caused by ‘straightener addiction’. As the outer layer of the strand of hair, known as the cuticle, is damaged over and over again, it becomes weaker and eventually exposes the center of the strand, called ‘the cortex’. The cortex is a bundle of proteins fibres which provide the strength and flexibility of hair. As the cortex is exposed to the heat of the straighteners, the protein fibres are also damaged until they unravel. Initially damage to the cortex manifests as split ends, but over time the hair becomes more and more fragile until it breaks completely.

As hair becomes more damaged by straightening, and strands break ever more frequently, there are clear signs of thinning and patchy growth.

Heat protection is only partial

To make matters even worse, many women believe that certain hair care products prevent straighteners from damaging their locks. Although true in part, most heat protection products cannot prevent ultra-high temperature damage caused by modern straighteners, particularly if straightening is being done on a daily basis.

There is good news however. Although over-use of hair straighteners causes thinning of hair, unlike other hair loss conditions, it rarely requires medical intervention. Hair loss experts suggest that by carefully nurturing heat damaged hair, it will eventually regain its strength, shine and body. An ultra-nourishing treatment should be used at the outset, as well as using a deep conditioner.

Once hair has been restored to full health, women should ideally try to break free of their ‘straightener addiction’, using them only occasionally to prevent further bad hair health and loss. Having frizzy hair trimmed is infinitely less harmful than constant straightening.

If it really is impossible to give up straighteners, experts suggest that women never straighten wet hair, nor go over the same area twice. Straightening at the tips should also be avoided as this is the weakest part of the hair strand.