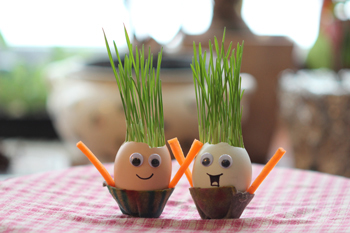 So-called “super foods” are hailed for their high nutritional value and claims of almost miraculous powers for curing a diverse range of conditions, including hair loss. Super foods are particularly popular with people who are looking to detox, or to use natural remedies for medical conditions wherever possible.

Here we look at two popular super foods and try to define whether they really can promote natural hair regrowth.

Prepared from the fresh sprouts of the common wheat plant, wheat plant is commonly sold in powder form before being added to juices or smoothies. Wheatgrass users suggest drinking at least one ‘portion’ of wheatgrass every day.

Wheatgrass is high in Vitamin E and Phosphorus, and many of its fans suggest that its high chlorophyll content is also beneficial for treating a wide range of common ailments. More surprisingly, some wheatgrass fans claim that drinking the nutrient, or making it into a paste and rubbing it onto the scalp slows hair loss and even promotes regrowth.

Unfortunately there is no scientific evidence that wheatgrass has any additional regrowth properties for someone with a hair loss condition. Wheatgrass does contain many of the nutrients required for healthy hair growth, however, so it may be useful as a dietary supplement to ensure hair follicles have all the chemical building blocks required.

A common ingredient in moisturisers and skin treatments, aloe vera is a short-stemmed spiky plant from Northern Africa. A mainstay of herbal medicine for centuries aloe vera is believed by some to have healing or soothing properties. Usually used for treating skin conditions like sunburn, aloe vera is also sometimes used as a food additive.

In some cases, men and women are supplied with aloe vera-based moisturisers to use on their scalp following a hair transplant operation. It is claimed that these creams help reduce redness and swelling, and may help promote new hair regrowth. Several online pharmacies also sell hair loss treatments that are based on aloe vera, claiming they will aid new hair growth for balding men and women.

Although neither wheatgrass nor aloe vera can directly boost hair growth, they could, when used as part of a balanced diet, help raise the body’s levels of the key vitamins and minerals that are used to produce new hair cells. When consumed as part of an holistic hair loss treatment plan, both plant extracts may help, but taken alone neither will help reverse hair loss or promote new growth.